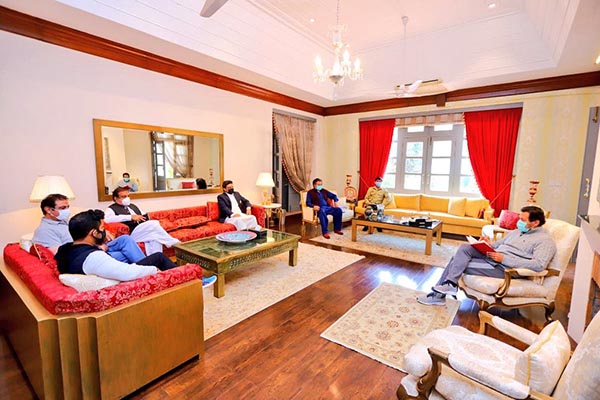 Senator Faisal Javed, in a deleted post on Twitter, shared a picture of the premier meeting lawmakers against SOPs

Prime Minister Imran Khan on Thursday appeared to violate the guidelines issued by his own government for home isolation of individuals who have tested positive for COVID-19.

However, while the participants of the meeting shown were all wearing masks and maintaining social distancing, the guidelines issued by the government for COVID positive patients are far more stringent.

According to the guidelines issued by the Ministry of Health Services, asymptomatic patients with confirmed COVID-19 infections must remain in home isolation for “at least 10 days” since their first positive test, “assuming no symptoms were developed following the positive test.” For people with symptoms—even mild ones such as the prime minister—at least 3 days need to have passed since recovery before they can end home isolation. The prime minister tested positive on Saturday, March 20, a mere five days before he conducted an in-person meeting as revealed in the tweet and accompanying photo. At a minimum, he must—as per the government’s guidelines—continue his isolation for 5 more days.

Pakistan is currently in the midst of a third wave of the pandemic, with authorities on Thursday morning reporting the highest single-day rise in new infections since July. Special Assistant to the P.M. on Health Dr. Faisal Sultan, just last week, urged the public to strictly adhere to SOPs to curb the spread of the virus, warning of an “alarming” situation.

Government officials have repeatedly blamed the public for not adopting SOPs, claiming the government is powerless in the face of public apathy. Critics, meanwhile, have warned that the government’s mixed messaging is confusing citizens and discouraging adherence to guidelines. The prime minister’s decision to violate SOPs for the sake of a meeting that could have been conducted via video-conferencing lends credence to their concerns.