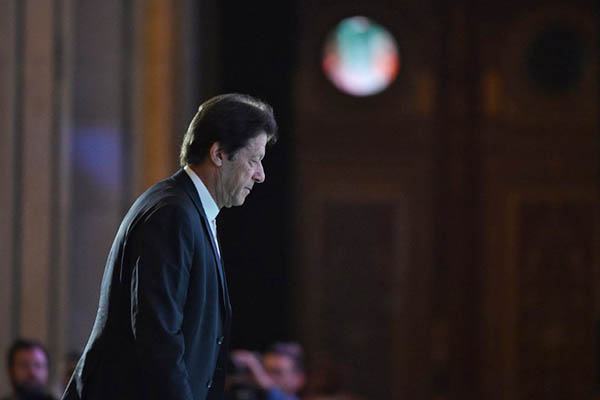 Prime Minister Imran Khan on Tuesday vowed to hold peace talks with rival India following elections in the neighboring country, after a similar offer from the former cricketer was “rebuffed.”

Khan made the announcement during a speech at a Saudi Arabian investment conference where the newly minted leader launched a charm offensive targeting potential investors as Pakistan seeks to secure funds amid a yawning balance of payment crisis.

“When I won the elections and came to power the first thing I tried to do was extend a hand of peace to India,” Khan told the crowd at the Future Investment Initiative (FII) in Riyadh, saying the overture was later “rebuffed” by Delhi. “Now what we are hoping is that we wait until the elections then again we will resume our peace talks with India,” he added, referring to upcoming nationwide polls scheduled to take place by mid-May.

In September India pulled the plug on a rare meeting between its foreign minister and her Pakistani counterpart on the sidelines of a U.N. summit—a move that was termed “arrogant” by Khan and unleashed a barrage of insults from both sides.

India has long accused Pakistan of backing militants in Kashmir, a Himalayan territory divided between the two countries but claimed in full by both since independence in 1947. Delhi has stationed about 500,000 soldiers in the portion of Kashmir it controls, where separatist groups demand independence or a merger with Pakistan.

Khan’s call for peace talks comes as his administration is desperately seeking funds from “friendly” countries, including Saudi Arabia, to shore up Pakistan’s deteriorating finances. The prime minister’s attendance at the FII comes as leading policymakers and corporate chiefs shunned the conference in response to the death of journalist Jamal Khashoggi at the Saudi consulate in Istanbul.

During his address at the FII Khan confirmed that Pakistan was also in talks with the International Monetary Fund (IMF) over a new bailout.

Since taking power in August Khan has also sought loans from allies such as China and Saudi Arabia, promised to recover funds stolen by corrupt officials, and embarked on a series of high-profile populist austerity measures. But help has been in short supply and economists’ warnings have grown increasingly urgent.