In meeting with newly elected premier, British envoy says he looks forward to working together on ‘shared priorities’ 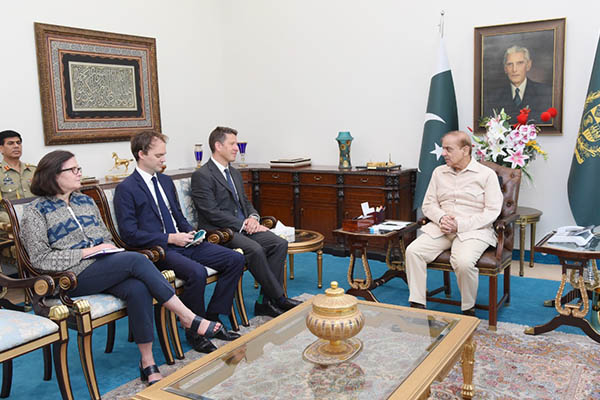 Prime Minister Shahbaz Sharif on Wednesday appreciated the work done by the United Kingdom in promoting education, health and other social sectors in Pakistan.

In his first meeting with British High Commissioner Christian Turner since being elected the 23rd Prime Minister of Pakistan on April 11, Sharif emphasized the importance of enhanced trade and investment ties, and the need to elevate the bilateral relationship to a strategic level. “Highlighting the positive bridge-building role played by around 1.6 million Pakistani diaspora residing in the U.K., the prime minister emphasized the need of strengthening cooperation in the field of legal migration to fully realize this potential,” read a statement issued by the Prime Minister’s Office.

It said that the high commissioner had congratulated Sharif on his election and conveyed the best wishes of the British government. The prime minister, likewise, expressed his gratitude to U.K. Prime Minister Boris Johnson for posting his congratulations on Twitter. “The prime minister added that Pakistan highly valued its relations with the U.K., which were based on historical linkages and convergent interests on a broad range of issues,” the statement added.

The British high commissioner, read the statement, thanked the premier and expressed the desire to work closely with Pakistan on deepening and broadening bilateral cooperation. “U.K.-Pakistan ties are deep,” Turner said in a posting on Twitter after the meeting. “Good first meeting with P.M. Shahbaz today. Looking forward to working together on shared priorities for our two countries,” he added.

Since his election to the Prime Minister’s Office, Sharif has been congratulated on his new post by the U.A.E, the U.S., Turkey, Russia, and China. In his inaugural address, the prime minister stressed upon the importance of maintaining good relations with all nations, specifically citing China, the U.S., and Saudi Arabia as countries whose ties with Pakistan had been “damaged” during the tenure of ousted prime minister Imran Khan.