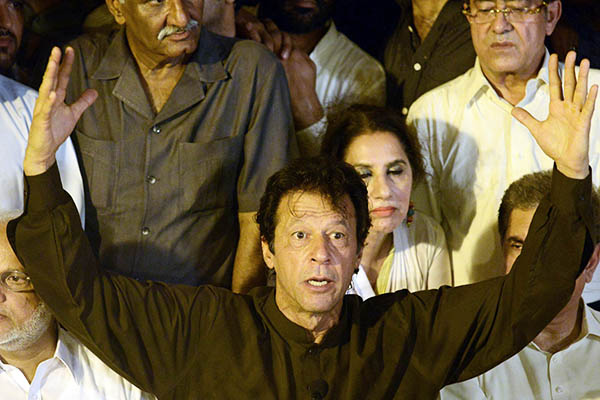 Prime Minister Nawaz Sharif on Tuesday announced the Supreme Court would probe allegations of rigging in last year’s elections, in an apparent bid to diffuse a political crisis that was immediately rejected by opposition leader Imran Khan.

The announcement was made two days ahead of the country’s Independence Day celebrations, when followers of cricketer turned politician Khan and populist cleric Tahir-ul-Qadri plan to march on the capital to demand that Sharif’s government step down ahead of a fresh vote.

Addressing the nation on Tuesday evening, Sharif said: “The government has decided that for independent and transparent investigations into the allegations of rigging a three-member commission of Supreme Court judges should be formed. My dear countrymen, after this step is there any room for a protest movement? I leave you to answer this question.”

But the proposal was almost immediately rejected by Khan, who heads the country’s third largest party in Parliament and has called the 2013 elections the most fraudulent in the country’s history. “You [Sharif] should resign, then a judicial commission should do its work. Because if you are at the helm, there cannot be any justice,” he told reporters outside his home in Lahore.

He also complained that the government was harassing and detaining his party members, adding: “You are digging your own grave by stopping and arresting our workers.”

Khan’s rejection of a judicial probe was a partial U-turn on an interview he gave to a local TV station a short while earlier in which he said he had faith in the Supreme Court and would trust any decision it made. The reversal may have cost Khan the support of Javed Hashmi, the president of the PTI, who informed media that he had not yet decided to participate in the ‘Azadi’ march. “I will share my decision with you people in the evening,” said Hashmi. However, party leaders have said Hashmi fully supports the march and will participate in it.

Sharif’s 2013 victory saw Pakistan’s first ever handover of power from one civilian-led government to another, in polls that local and foreign observers called credible. In his television address, the 64-year-old prime minister said that economic progress had been made under his government and that the opposition groups’ protests would reverse the tide.

Pakistan’s foreign exchange reserves have doubled from $7 billion to $14 billion under Sharif’s tenure while the rupee has stabilized to around 98 to the dollar after hitting highs of around 110.

Many analysts claim the opposition groups are playing into the hands of the country’s military establishment, which they claim wishes to cut the civilian government, with which it has several disagreements, down to size.

Khan, who says he is struggling for an “interim national government” consisting of technocrats and experts, has announced he will merge the PTI’s march with that of Qadri’s supporters.

Siraj-ul-Haq, the chief of the Jamaat-e-Islami political party that is a coalition partner with the PTI in the Khyber-Pakhtunkhwa government, said his supporters would not back any undemocratic steps. “I, once again, would like to request both parties to come to the negotiating table and resolve all issues through talks,” he said.

Tension has gripped parts of the country since last week with running clashes between police and supporters of Qadri in Lahore over several days leaving at least one protester dead. In the capital Islamabad, authorities have been preparing to seal the capital using shipping containers while rumors of impending market closures have sparked panic buying for groceries and petrol.

The marches are planned for Aug. 14, the date of Pakistan’s independence from Britain in 1947.

The government for its part has rejected the allegations and accuses the opposition groups of attempting to obtain by force what they could not achieve through democratic means.