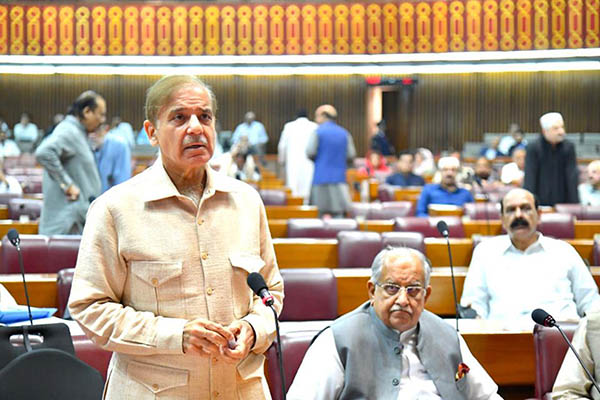 Prime Minister Shehbaz Sharif on Monday slammed ousted premier Imran Khan over an “anti-state” speech, stressing that he could no longer be allowed to divide the country.

Addressing the National Assembly, Sharif accused the Pakistan Tehreek-e-Insaf (PTI) chairman of trying to sow discord by alleging a baseless “foreign conspiracy” and warned that if the situation were not resolved, Pakistan could suffer the same fate as Syria or Libya.

“What Imran Khan said yesterday was horrible,” he said on the floor of the Lower House. “He is poisoning the minds of the country’s masses. The country will be further divided and this language must be stopped according to the Constitution and law,” he added.

Sharif’s condemnation was directed at a speech Khan delivered at a rally in Abbottabad on Sunday. While reiterating his criticisms of state institutions—such as the armed forces—voicing neutrality, he had also described Mir Jafar of “betraying” Sirajud Daulah while his “commander-in-chief.” This has been widely perceived to be a veiled reference to the Army chief—a belief supported by the military’s media wing subsequently issuing a press release urging politicians, journalists and analysts against maligning state institutions.

In his speech, the prime minister said Khan’s example of the betrayal of Bengal’s Sirajud Daulah “in reference to our national institutions” was “very dangerous and terrifying.” He claimed that Khan had “directly” likened Pakistan’s institutions to Mir Jafar and Mir Sadiq.

Reminding lawmakers that the same institution Khan was now targeting had earlier provided him unprecedented support, he slammed the ousted premier for his abuse. “You [Khan] were fine with this institution when it was feeding you like a baby… the support you got from it was unprecedented,” he said, adding that if any of the other governments had gotten even a fraction of the same support, they could’ve helped Pakistan soar.

Noting that “threats” from foreign states were nothing new, Sharif accused Khan of “making a mountain out of a molehill” through his narrative of a foreign conspiracy. “If he is not stopped … it could lead to chaos. He [Khan] wants to wind up the democratic system. This should be controlled otherwise no one will be spared,” he added.

Shortly after the prime minister’s speech, the National Assembly unanimously passed a resolution—moved by Parliamentary Affairs Minister Murtaza Javed Abbasi—condemning the PTI chief for allegedly maligning state institutions. The house resolved that no one would be allowed to malign state institutions for political gains.

“Pakistan’s security forces are defending the country’s borders fearlessly and have given countless sacrifices while defending the country against the scourge terrorism,” read the resolution. “Any attempt to malign a state institution for political gains is a disservice to Pakistan,” it added.