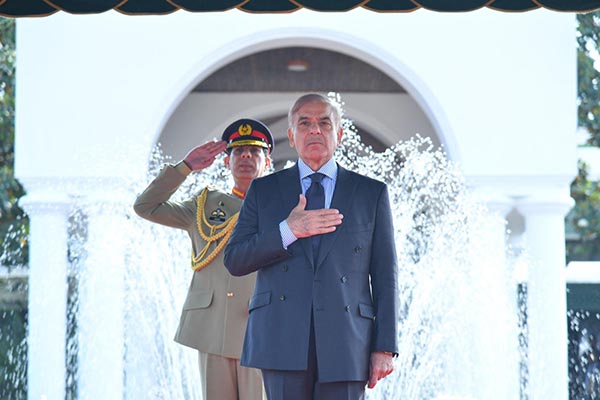 Prime Minister Shehbaz Sharif will commence a three-day visit to Saudi Arabia from today (Thursday), his first foreign tour since he assumed office earlier this month.

“Today I am embarking on a visit to Saudi Arabia to renew and reaffirm our bonds of brotherhood and friendship,” the prime minister said in a posting on Twitter. “I will have wide-ranging discussions with Saudi leadership. KSA is one of our greatest friends and as Custodian of the Two Holy Places, has a special place in all our hearts,” he added.

“The prime minister is leaving for Saudi Arabia on the special invitation of Crown Prince Mohammed bin Salman,” read a statement issued by Information Minister Marriyum Aurangzeb. “Spanning April 28-30, this visit … is a manifestation of the fraternal, fervent and mutually beneficial ties between the two countries,” she said, adding that it would herald a new “historical” chapter in bilateral relations.

Slamming the deterioration in ties between Islamabad and Riyadh during the tenure of the ousted Pakistan Tehreek-e-Insaf (PTI)-led government, she said P.M. Sharif’s visit would revitalize this friendship. “Congratulations [to the public] on the resumption of the journey of stability, development, and prosperity,” she said. “Long live the Saudi Arabia-Pakistan friendship,” she added.

According to the Foreign Office, the prime minister would be accompanied by a high-level delegation, including key members of his federal cabinet. During his visit, it said, he would have bilateral interactions with the Saudi leadership, with a special focus on advancing economic, trade and investment ties and the creation of greater opportunities for the Pakistani workforce in the Gulf kingdom. “The two sides will also exchange views on a range of regional and international issues of mutual interest,” it added.

“Pakistan and Saudi Arabia are bound by fraternal relationship marked by mutual trust and understanding, close cooperation, and an abiding tradition of supporting each other,” it said. “The people of Pakistan hold the Custodian of the Two Holy Mosques in the highest esteem,” it said, noting that the bilateral relationship was complemented by close mutual collaboration at regional and international fora.

Noting that Saudi Arabia was home to more than two million Pakistanis, who contribute to the progress, prosperity and economic development of the two brotherly countries, it said the visit would impart a “strong impetus” to deepening bilateral cooperation in diverse fields and further reinforce the growing partnership between the two countries.

According to local media, the prime minister is expected to seek an additional deposit of $2 billion from the Gulf kingdom—beyond the existing $3 billion—to shore up its foreign reserves. Similarly, it wants to double a deferred payments facility for oil from $1.2 billion to $2.4 billion.

Saudi Arabia welcomes Pakistan’s Prime Minister. The bonds and brotherhood between the two countries are tight and steady.