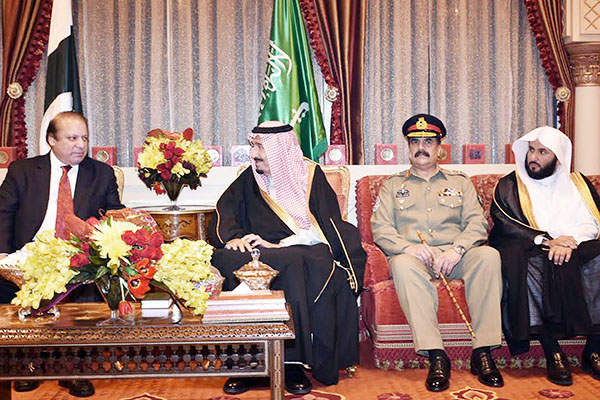 During visit to Riyadh, Nawaz Sharif calls for peaceful resolution to differences between Riyadh, Tehran.

Sharif visited Riyadh in an effort to ease those tensions and is to head on Tuesday to Iran where he is expected to meet President Hassan Rouhani. “The prime minister expressed our deep concern on the recent escalation of tensions” between Riyadh and Tehran, Islamabad’s foreign ministry spokesman Qazi Khalilullah said. “He also called for an early resolution of differences through peaceful means, in the larger interest of Ummah, particularly during these challenging times.”

Saudi Arabia and a number of its Arab allies cut diplomatic ties with Iran in early January, sending already tense relations between the rival nations to a new low. Riyadh reacted after protesters burned Saudi diplomatic missions in Iran over the kingdom on Jan. 2 executing Shia cleric Nimr al-Nimr. He was among 47 people put to death in a single day for “terrorism.” Most of those executed were Sunnis.

According to the Saudi Press Agency, Salman “welcomed the prime minister of Pakistan and his delegation” to his palace. The report gave no details of their discussions, which SPA earlier said were to touch on regional as well as bilateral issues.

“The purpose of the visit is to mediate and to end the standoff between the two countries,” a Pakistani government official told AFP, requesting anonymity, before the prime minister arrived.

Sharif landed in Riyadh two days after a historic international deal lifted sanctions on Iran in return for a scaling back of its nuclear capabilities. Riyadh fears the agreement will only further embolden Iran, which it accuses of regional interference.

During Monday’s meeting, Pakistan also “assured the kingdom of its support” for a separate Saudi coalition of 34 nations to combat “terrorism” in the Islamic world, the Pakistani statement said. “It was agreed that both countries would work together to defeat our common enemy—terrorism and extremism.”

Diplomats have said it remained unclear how the 34-nation coalition will work in practice.

Pakistan has deep military connections with Saudi Arabia and it has long benefited from the oil-rich kingdom’s largesse. Sharif himself has close personal ties with the Saudi royal family who sheltered him during years in exile.