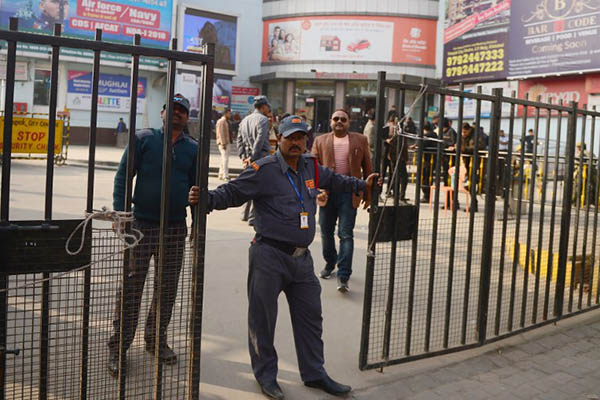 Thousands of police in riot gear guarded cinemas across India on Thursday amid threats of violence by Hindu hardliners opposed to the release of a movie about a legendary Hindu queen and a Muslim king.

Some schools near Delhi closed after an attack on a school bus, while distributors in several states have said they will not show Padmaavat because of fears of violence.

The Bollywood epic still opened in nearly 5,000 cinemas across the country early Thursday under heightened security. Two theaters in eastern Bihar state were set upon by mobs who damaged vehicles and threatened cinema goers. A molotov cocktail was hurled at another cinema in neighboring Uttar Pradesh state but staff quickly doused the flames.

Paramilitary forces and police in riot gear manned barriers around cinemas in New Delhi, Mumbai and other main cities.

Radical groups say the film falsely portrays Queen Padmavati. The producers vehemently deny the claim while most historians doubt that Padmavati even existed. Fanatical groups belonging to India’s Rajput caste, who revere Padmavati, have lead protests against the film for nearly a year. They have been supported by other Hindu groups since the film was cleared for release by the state censor this month.

The group staged a motorcycle rally through Jaipur in Rajasthan, one of three states where cinema owners refused to show the film for security reasons.

Dozens of schoolchildren ducked inside a bus that was pelted with stones by anti-Padmaavat protesters in Gurgaon, a satellite city of Delhi. Another bus was set on fire.

Police said Thursday that 18 people had been arrested over the bus attack and 10 others for affray. On Tuesday several hundred people attacked shops, set alight dozens of motorbikes and damaged more than 150 cars across Gujarat state’s main city Ahmedabad.

The film drew few spectators at early morning screenings in New Delhi as police erected iron barricades outside cinemas that did not display promotional posters to avoid any backlash.

Sanjay Bhargava, manager at a New Delhi cinema, told AFP there was an “atmosphere of fear” due to the threats but he still expected a busy weekend. “As of now there is a bit of fear but with foolproof police protection, we hope things will improve soon,” Bhargav said outside his cinema, protected by dozens of police, in the central Connaught Place district.

The film featured three disclaimers informing viewers that it did not claim to be historically accurate.

Sabrina Ghosh, a young movie buff, was not deterred by the paramilitary officers and barricades surrounding the Delhi cinema where she rushed to catch the debut screening. The 23-year-old described the violent outburst before the film’s release as “disgusting.”

“No one has any right to go around torching buses and cars. If you don’t like it, don’t watch it,” she told AFP at the cinema.

Opponents claim the movie features a romantic liaison between Padmavati and 14th-century Muslim ruler Alauddin Khilji despite repeated denials by filmmakers. The movie’s producers say the film celebrates Rajputs, who were traditionally warriors.

The protesters insist the movie distorts history, even though experts say the queen is a mythical character and that her story is based on a poem written more than a century later.

Members of the fringe groups have threatened to attack cinemas while hundreds of women have said they are ready to perform a mass self-immolation if screenings go ahead.

Hardliners also offered bounties of up to 50 million rupees to anyone who “beheaded” lead actress Deepika Padukone or Bhansali.

States including Rajasthan, Madhya Pradesh and Punjab tried to ban the film but India’s Supreme Court ruled that this would violate creative freedoms.

Padmaavat stars Shahid Kapoor as Maharawal Ratan Singh, the husband of Padmavati, and Ranveer Singh as Khilji, who leads an invasion to try to capture the queen. It was initially due to hit screens on Dec. 1 but filmmakers pushed back the release because of the controversy.

Despite the threats, industry watchers still expect Padmaavat to be a box office hit. “The movie will make one billion rupees over the long weekend from Thursday to Sunday despite the protests,” trade analyst Akshaye Rathi told AFP, referring to India’s Republic Day holiday on Friday.