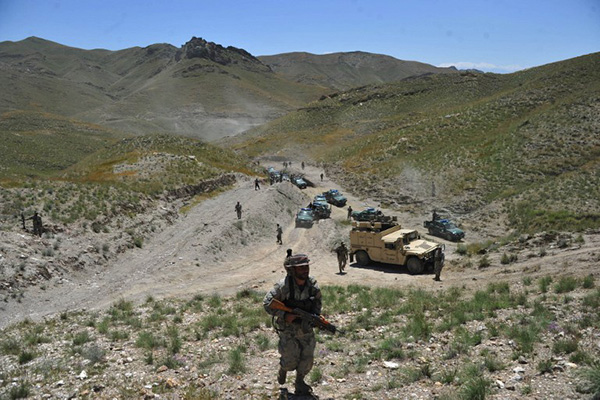 Karzai says cross-border clashes an attempt by Pakistan to force Kabul into accepting the Durand Line, the international border which Afghans dispute.

Cross-border clashes broke out on Monday between Pakistani and Afghan security forces for the second time in five days, escalating tensions between Islamabad and Kabul.

On the edge of the Afghan capital, more than 2,000 people, mostly villagers, demonstrated and chanted “Death to Pakistan!” to protest against the fighting. Ties between the fractious neighbors have become increasingly strained despite renewed efforts last month from U.S. Secretary of State John Kerry to get them to work more closely on peace efforts in Afghanistan.

Afghanistan and Pakistan are in dispute over a site where Pakistan has tried to construct a gate on what Afghan officials say is Afghan territory. Clashes last Wednesday in the same spot killed an Afghan guard and wounded two Pakistanis. The porous border is unmarked in places and is a key battleground in the fight against Taliban violence plaguing both countries.

“Pakistan shamelessly, again today, tried to construct those buildings. This action led to fighting,” said Ahmad Zia Abdulzai, spokesman for the government in the eastern Afghan Nangarhar province. Abdulzai said the fighting involved heavy and light weapons, but refused to say who started it, when asked.

A senior Afghan official in Kabul confirmed the incident. “Today the Pakistanis returned to the construction site and said they will rebuild the installations,” said Sediq Sediqqi, an interior ministry spokesman. “Our border police told them not to do so. The Pakistanis fired at them and our police returned fire. The fighting lasted for two hours before the Pakistanis requested a ceasefire,” the spokesman added. He said the clashes had since stopped and the Pakistani border guards had left the site of the construction.

Pakistani officials blamed the Afghans for starting the clashes. “Afghan troops opened unprovoked fire from across the border at our post … They fired mortars and automatic weapons,” one Pakistan official said on condition of anonymity. “Our troops responded with retaliatory fire. There have not been reports of any casualties so far. The exchange of fire continues at intervals,” a second official said, also speaking on condition of anonymity.

Afghanistan and Pakistan are both U.S. allies in its war on terror. But Kabul accuses Islamabad of playing a double game through its alleged support of Taliban attacks on U.S. and Afghan troops. Pakistan denies the allegations and is locked in its own battle against the Pakistani Taliban. On Saturday Afghan President Hamid Karzai said the cross-border clashes “could be” an attempt by Islamabad to put pressure on Kabul to accept the Durand Line, the international border between the countries which Afghans do not accept.

Pakistan’s foreign ministry dismissed Karzai’s remarks and said “opening discussions on this issue” was a “distraction from the more pressing issues requiring priority attention and cooperation of Pakistan and Afghanistan.” It said Pakistan’s post had come under attack and complained about “several threatening and provocative statements” from Kabul.