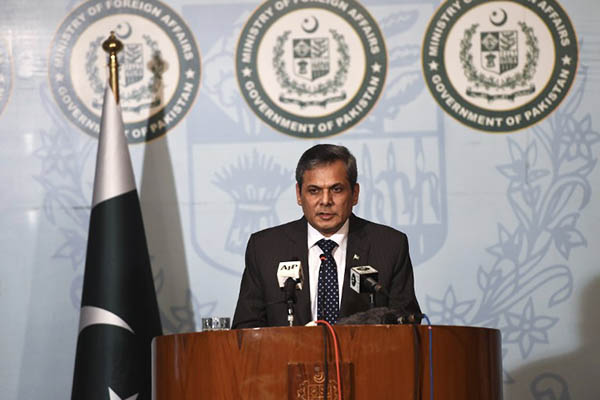 Pakistan on Thursday accused eight Indian embassy employees of involvement in spying and terrorism but stopped short of expelling them, in the latest apparent tit-for-tat move as relations between the two countries nosedive.

The declaration came days after a similar move by New Delhi, which accused six Pakistani diplomats of being part of a spy network, forcing Islamabad to withdraw them from their posts. “A number of Indian diplomats and staff… have been found involved in coordinating terrorist and subversive activities in Pakistan under the garb of diplomatic assignments,” foreign ministry spokesman Nafees Zakariya told a press briefing in Islamabad.

He went on to name the eight men including one accused of using a false identity to pose as an employee of a Pakistani mobile network. “All these eight officials were involved in espionage, subversion and supporting of terrorist activities,” he said.

New Delhi rejected the allegations, calling them “baseless and unsubstantiated.”

“We completely reject the baseless and unsubstantiated allegations made by Pakistan against certain officials of Indian High Commission in Islamabad,” Vikas Swarup, foreign ministry spokesman told reporters in New Delhi. “The allegations against the Indian officials represent an afterthought and a crude attempt to target these officials for no fault of theirs,” he said.

Tensions between the neighboring nations have soared since a raid last month killed 19 soldiers on an Indian army base near the de-facto border dividing the disputed Kashmir region, the worst such attack in more than a decade. India blamed militants in Pakistan and said it had responded by carrying out strikes across the heavily militarized border, although Islamabad denies these took place.

Cross-border shelling between the two countries has led to at least 14 civilian deaths in November alone.

Tensions were already high before the army base attack, with nearly 90 people killed in clashes with security forces in India-administered Kashmir over the death of a popular separatist leader in July.

The latest round of diplomatic expulsions began on Oct. 27 when India detained a Pakistani visa official accused of spying, later declaring him persona non grata and sending him home. Pakistan responded with a similar move the same day.