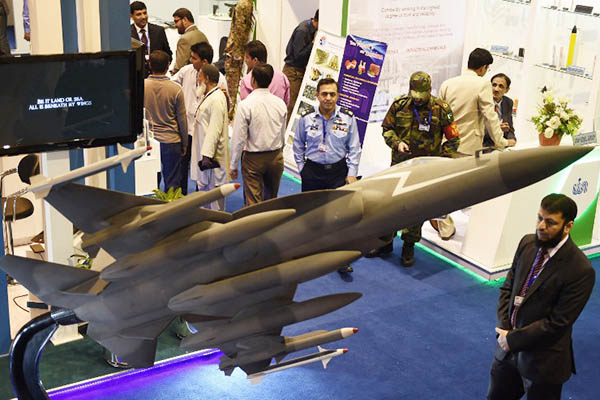 The head of the Pakistan Aeronautical Complex (PAC) said on Tuesday that Pakistan had introduced 50 home-assembled multi-role JF-17 Thunder fighter jets into its Air Force.

Air Marshal Javed Ahmed, chief of the state-owned Pakistan Aeronautical Complex (PAC), said the Pakistan Air Force (PAF) had already received 50 of the homemade aircraft and that the supply of the second block would start this month. “The five aircraft of the next block would be inducted [into PAF] this year,” said Ahmed on the sidelines of the International Defense Exhibition And Seminars (IDEAS) in Karachi, an arms fair that brings together dealers from all over the world.

Pakistan has been manufacturing the JF-17 aircraft since 2009 with the help of the Chengdu Aircraft Industry Corporation of China (CACC). “JF-17 is a modern aircraft, it fulfills all the needs of PAF, it is affordable, the cockpit is very user friendly, all beyond visual range attack capabilities as well as stand of deliveries are available at this aircraft,” Ahmed added.

Pakistan’s defense budget sucks up about 20 percent of its national income annually, leaving a meager share for education and health facilities.

Pakistani ordnance factories have recently been making attempts to develop arms to meet domestic needs, as well as seeking to tap into the export market. “A lot of international customers from developing countries have shown interest in the aircraft and we are in active negotiations with many countries,” the PAC chief said.