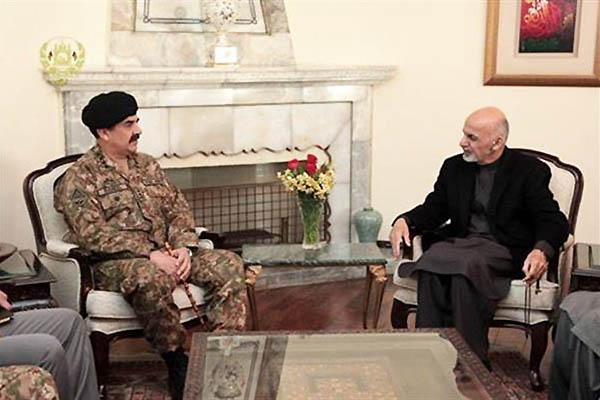 President Ghani held talks with Sharif in Kabul as Pakistan mourned the victims—mostly children—killed in the massacre that put new pressure on Islamabad to combat militancy. Pakistan accuses Afghanistan of protecting members of the Pakistani Taliban, while Afghanistan routinely accuses Pakistan of providing shelter within its borders to the Afghan Taliban.

The statement gave no details on whether the two discussed the handing over of Pakistani Taliban chief Mullah Fazlullah, who is believed to be hiding in Afghanistan.

Sharif said Pakistan was hunting those behind the Peshawar attack, according to the statement from the Afghan presidency. “[Sharif] said that Afghanistan and Pakistan should jointly work together and take serious steps in the fight against terrorism so to prevent the repeat of such acts,” it added.

Retired Afghan general Atiqullah Amarkhail dismissed Sharif’s trip as an attempt to distract attention from the failure to prevent the attack in Peshawar. “The trip is no more than a maneuver by the Pakistanis to pressure the Afghan government and pretend those responsible for the deadly Peshawar attack are based in Afghan soil,” said Amarkhail.

Some of the militants who attacked the Army-run school in Peshawar Tuesday spoke in Arabic, according to a senior Pakistani security official, which he said suggested that they had links over the border in Afghanistan.

Ghani, who came to power in September, and Prime Minister Nawaz Sharif have overseen an improvement in ties in recent months.