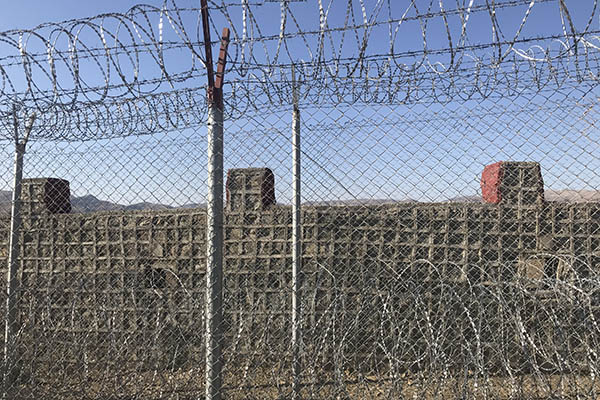 Islamabad must prepare for the fallout of the complete withdrawal of U.S. troops from the war-torn state

America is leaving Afghanistan after its longest war ever without reaching an understanding with the insurgent Afghan Taliban on what will happen next. The Taliban have refused to live under democracy—as opposed to Islamic law—and never abandoned their terrorist policy in Afghanistan. Next-door Pakistan is supposed to be the beneficiary of American withdrawal because it was seen in the past as being close to the Haqqani group of the Taliban that lived in Pakistan and attacked Afghanistan across the Durand Line.

The world has been seeing Pakistan as the “spoiler” in the Afghan war; but Pakistan building a wire-fence on the Durand Line clearly outlines Pakistan’s own fear of attack from within Afghanistan where its own Tehreek-e-Taliban Pakistan (TTP) live as war refugees and have attacked Pakistan across the Durand Line. (The terrorist attack in Quetta on April 22, 2021 was unofficially dubbed by Pakistan as an attack from the TTP after the extremists claimed responsibility for it)

Pakistan is more vulnerable than any other neighbor of Afghanistan to terrorism from America’s withdrawal. The latest Quetta attack was dubbed by the Pakistani media as an “attack from India” meaning that the TTP was “on the take” from India. The other neighbor of Afghanistan, Iran, is not similarly at risk because it has no Afghan population living in Iran. The Afghan Taliban in power after the American exit will refuse to acknowledge the “wire-fenced” Durand Line and thus threaten Pakistan in the future rather than Iran; or India, which has invested in Afghanistan because of the closeness it enjoyed with the Kabul’s Pashtun-Tajik coalition.

Afghan nationalities and the China factor

Iran in the west is close to the Persian-speaking Tajik north of Afghanistan, which dominates the Afghan army; Pakistan in the east is close to the Pashtuns but is at odds with the Afghan Taliban, Pakistani Taliban and “foreigners” partly included in Islamic State and funded by its Gulf supporters. Actually, Pakistan has no friends in Afghanistan and should fear the coming to power of the Pashtun against the other Afghan nationalities that have benefited from the 20-year U.S.-NATO occupation of Afghanistan. It is feared and loathed by the non-Pashtun nationalities of Afghanistan.

The “China factor” in the region has handicapped Pakistan further. U.S. President Biden didn’t invite Prime Minister Imran Khan to a “virtual” world summit on climate change while pointedly inviting India; this decision was reversed later. The U.S. is fighting its new cold war against China with the “Quad” (U.S., Australia, Japan, India) in the India-Pacific region and has refused an Indian request to include Russia in its grouping. This resulted in Russian foreign minister Lavrov racing to Pakistan and announcing a big infrastructure project that ordinary Pakistanis didn’t know existed.

The U.S. meanwhile has asked Turkey to join in post-withdrawal “Afghan talks” because Turkey is at odds with China over the persecuted “Turkic” Uighurs of China and because every time the Uzbek “north” of Afghanistan was in trouble with the Taliban, Turkey gave succor to their leaders. What is happening in Afghanistan is a gathering of anti-China powers while Pakistan is out of the picture.

America seems determined to counter the rising influence of the Chinese Belt and Road project providing infrastructure in Pakistan and Central Asia. That China has stepped into an almost-nuclearized Iran with an investment of $400 billion is going to persuade America to meddle in Central Asia too, challenging China and Russia at the same time. But in Afghanistan, India, with its 11 percent growth rate, is going to make life difficult for Pakistan whose economy is languishing below zero percent. India is too big for Pakistan to counter: even its Gulf Arab friends invest their money in the “functional” Indian economy.

Pakistan’s vulnerability despite the wire-fencing of the Durand Line is owed to its internal factors. Its writ of the state is challenged by pro-Taliban Deobandi-Wahhabi religious organizations unhappy with the state’s identity. Street power is acquired inside Pakistan on the basis of their ability to spread their message among the masses more effectively than the state itself. Once the Taliban unleash their post-U.S. war in Afghanistan, the madrassa in Pakistan is going to be persuaded to join in. In the past, the war in Afghanistan has attracted many Islamic states to develop their “jihadi” wings; this time too it will happen, but the state of Pakistan will be less able to control them and will risk “internal” differences to embarrass its military leadership.

Afghan women—“emancipated” and holding public offices during the U.S. occupation of Afghanistan—will be attacked by the Taliban and may be punished once the Ghani coalition in Kabul is not effectively protected by the Afghan army. Already thousands have applied for U.S. visas and Washington has not responded. This simply points to a much larger problem. A very large population of Afghans, fearing assault during the coming war and fearing persecution under the Taliban, will look to migrate out of Afghanistan and will find only Pakistan—now fenced in—easy to flee to, as 3 million of them did after 9/11, and the war triggered by the attacks planned inside Pakistan by a Pakistani member of Al Qaeda.

India finds itself at a loss in the coming Afghan scenario. The Taliban takeover will bring back the old “power map” of Afghanistan: south dominated by the Pashtun with Pakistan as a neighbor; and north dominated by non-Pashtun Tajiks, Hazaras and Uzbek-Turkmen, reaching out to India in the past but now landlocked from South Asian politics. Pakistan should have liked the new power scenario had it not “offended” the Taliban by attacking its own militants, forcing them out to Afghanistan and compelling them to become part of the “external” forces Islamic State and Al Qaeda.

The new scenario is obviously to the disadvantage of India, which has spent money in the past on Afghanistan under the current Tajik-Pashtun coalition government and has reached out to the non-Pashtuns of the north. New “supporters” will step in, like Turkey that has traditionally supported the Turkic warlords in Afghanistan and will compete with China in Afghanistan because it protests the persecution of “Turkic” Uighurs by Beijing.

Inside Pakistan, the rise of the religious parties would be most affected by the Taliban in power in Kabul after the U.S. exit. These “street-power” organizations are not Pashtun but have a past of alignment with Al Qaeda and the Afghan Taliban, some like sectarian Sipah-e-Sahaba taking part in the invasion of Mazar-e-Sharif on the side of the Taliban.

Pakistan will be loved by no one in the “post-exit” Afghanistan especially after Islamabad’s resolve to disallow any more Afghan refugees on its soil. It will face attacks from the Pakistani Taliban who will now wield some power and persuasion in Kabul, compelling the new government to force Pakistan into amnesty for them. Add to that the still powerful presence of the TTP, demonstrated by the Quetta act of terrorism inside the Serena Hotel in April 2021, warning Pakistan that it could still figure as a party to deal with in its Afghan policy. Add further to that the offense taken by Pakistan’s favorite Afghan Taliban combine, the Haqqani Network, when it was ousted from Waziristan before Pakistan wire-fenced the Pak-Afghan-border. That “expatriation,” incidentally, has not stopped the TTP from crossing over and attacking inside Pakistan.

At this stage, the India policy in Islamabad shows signs of softening and any new communication policy with the now-pressured Modi government might result in a discussion of a Pak-India trade corridor to Afghanistan with the already-expressed approval of China. Both the states are going to find it difficult to shore up their influence in Afghanistan once the Taliban take over in Kabul. India’s approach to Kabul through Chabahar across the intervening Iranian territory has become problematic after its joining the anti-China—and therefore anti-Iran—American regional formation.

China would like India to “normalize” with Pakistan through trade, thus breaking the “encirclement of China” strategy, given now that it has a big economic presence in Iran too. Russia, kicked out of the anti-China Quad, is now squarely in the “Chinese club” of regional states, and would like to “persuade” the Taliban in Kabul to join what would look to them like an anti-U.S. formation in South Asia.

CPEC to the rescue

Pakistan, after 73 years, is not a properly organized state despite becoming a nuclear power with no transfer of technology in its primitive military-dominated economy. As an economic power it is no longer able to contest Kashmir with India but can enable Kashmiris to live under tolerable conditions by normalizing ties. Its hinterland is undeveloped and almost half of its territory—the erstwhile tribal areas and Balochistan—is without a proper writ of the state, lacking in such state institutions as local administration with normal police and judicial institutions. It has undertaken a “transformational” project in CPEC, which can bring normal “affordable” administration to these regions. The fact that CPEC has run up against obstacles while Pakistan was focused on war-fighting is a major failing.

Economist Saqib Shirani, writing in daily Dawn on April 23, notes: “By putting together and leading the $62 billion CPEC, China is now playing a potentially transformational role in Pakistan’s economy. Despite Pakistan’s inability to conceive a grand design for CPEC, the project offers an unprecedented opportunity to transform the country’s economy. The immense benefits will accrue, however, not by limiting CPEC to a transit corridor for two-way shipments to and from China using Gwadar, or by over-investment in power generation leading to expensive excess capacity, but by integrating Pakistani firms into the Chinese supply chain and relocating ‘sunset’ industries from the mainland to Pakistan. This should have been the clearly articulated central aim and purpose of CPEC for Pakistani planners from the start.” It’s still not too late; but the time remaining for Pakistan to adequately profit off the economic benefits from CPEC is fast running out.