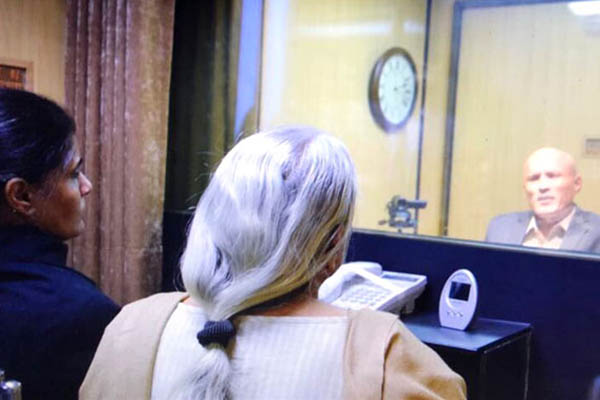 Authorities allowed an Indian national sentenced to death for spying to see his family for the first time since his arrest, a rare and highly anticipated meeting arranged amid tight security in Islamabad.

Kulbushan Sudhir Jadhav, clad in a blue jacket, met with his wife and mother at Pakistan’s foreign ministry in the capital, where they spoke through a glass barrier, pictures issued by the ministry showed. The images were low quality, and it was impossible to ascertain Jadhav’s well being, but he was sitting up and appeared to be healthy.

In a video released by authorities ahead of the meeting, Jadhav said he was grateful to Pakistan for a “grand gesture.” It was not clear if the video was filmed under duress.

The meeting, which a foreign office spokesman said lasted around 40 minutes, is the first time Pakistan has granted access to the family of Jadhav, who was arrested in Balochistan last year. An Indian diplomat was present during the meeting, but was not allowed to talk to Jadhav or listen to the conversation with his family, the foreign ministry spokesman said.

Pakistani officials claim he has confessed to spying for Indian intelligence. On Monday, the Foreign Office spokesman described him to media as “the face of Indian terrorism in Pakistan.”

Jadhav was found guilty in a closed trial by a military court and sentenced to death.

New Delhi sought the intervention of the International Court of Justice, which ordered Pakistan to stay the execution until it passes final judgment in the case.

India has maintained that Jadhav is not a spy, and that he was kidnapped by Pakistan. New Delhi has also accused Islamabad of violating the Vienna Convention by denying consular access.

The rival nations routinely accuse one another of sending spies into their countries, and it is not uncommon for either nation to expel diplomats accused of espionage, particularly when tensions are high. Death sentences, however, have rarely been carried out in such cases in recent years.

Indian national Sarabjit Singh, on death row for spying in Pakistan, was attacked and killed in jail by fellow inmates in 2013. He had been on death row for 16 years. In Balochistan, Pakistan’s largest but least developed province, security forces have been battling a years-long separatist insurgency that authorities have repeatedly characterized as “terrorism” promoted by hostile states such as India.

Jadhav, who has two children, reportedly joined India’s prestigious National Defense Academy in 1987 and was commissioned as an engineer in the Indian Navy in 1991. The son of a retired police officer, Jadhav’s neighbors remember him as a shy but helpful man who was good at sport and studies, according to Indian media reports.