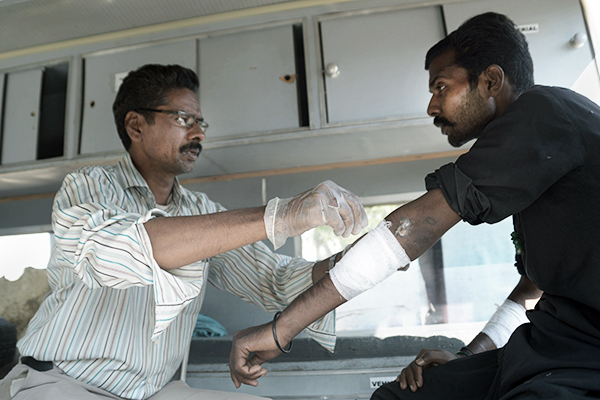 Imran with an addict in Karachi, Nov. 22. Rizwan Tabassum—AFP

Between two trucks on an abandoned, garbage-strewn railway, teenagers openly shoot up drugs as children pass by on their way to school—a daily scene in Karachi, where heroin is undermining Pakistan’s efforts to combat the spread of HIV.

“You can find any drug you want in Karachi,” said Shahzad Ali, his left hand swollen by repeated injections, one of tens of thousands in the city of 20 million lured to cheap Afghan heroin. Like others, he stumbles around on the old railway line in the district of Musa Colony, where young people shoot up near mounds of smoldering garbage into which scavengers dig for anything that might be consumed or resold.

Pakistan has an estimated 1 million heroin users, half of whom use needles. There are fears that the country’s addiction is set to deepen, with neighboring Afghanistan’s opium production hitting a record of 5,500 tons this year—even before the withdrawal of NATO forces in 2014.

A former male prostitute and heroin addict, NGO worker Mohammad Imran knows all too well the ravages of the drug. “Because I belonged to this environment not so long ago, I can feel their feelings, their problems and everything else very clearly,” he said.

He witnessed firsthand the rise of heroin in disadvantaged neighborhoods, where a shot can be bought for next to nothing. He distributes new needles to addicts from his mobile clinic. “I can understand exactly what someone needs and I can provide them a good service at the right moment.” Despite using for 20 years as a sex worker, Imran escaped HIV infection and AIDS.

Tarak Abbas was not so lucky. Diagnosed two years ago, his cheeks hollowed by years of drug abuse, he is now trapped, homeless on the streets of Karachi. “Whenever young kids come to me I tell them: ‘Look at me, no one cares about me now,’” he said. “The people who used to think I was a good man, they don’t even want to sit with me now, just because of AIDS.” He blames heroin for his problems. “There are many diseases you can catch and you are cut off from your loved ones. Your life is destroyed and you will lose respect.”

Abbas is not alone. In Pakistan, almost 30 percent of those who inject heroin are HIV positive, one of the highest rates in the world and up from 11 percent in 2005. NGOs are attempting to stem the HIV crisis by distributing clean needles in the slums of Karachi.

“At first, people said we were promoting drugs, but they have since realized that heroin addicts always find a way to get a fix,” said Dr. Maria Atif. “It’s booming. You know it is increasing every day because there are a number of social factors that are propelling people toward this menace. And despite all the efforts claimed by government, it is easily available here.”

Afghanistan produces 90 percent of the world’s heroin, with almost half of its production channeled through Pakistan on its way to Europe or Asia, hidden in containers shipped from Karachi. But the drug doesn’t just pass cleanly through; it picks up addicts along the way.

“Pakistan is a transit hub, but has also become a consumer,” said Cesar Guedes, head of the U.N. Office on Drugs and Crime in Pakistan. “Part of this drug stays in the country not because it is a profitable market … but because traffickers pay in cash and in kind, creating a local market.”

Karachi has in recent years seen a new crossover between Afghan heroin destined for Europe and Asia and imported South American cocaine, fueling speculation of collaborations between Latin American cartels and Pakistani drug lords or the Taliban, who are partly funded by drugs.

“There are no boundaries, there is no nation, there is no religion; it is about money. They have joined hands to get more money,” said Akbar Khan Hoti, chief of the drug unit at the Ministry of Interior. Heroin isn’t the only problem. Since the beginning of the year, “more than a ton of cocaine” has been seized at Karachi port, said Hoti.

Customs authorities in Karachi have only one sniffer dog, according to internal sources, and lack the ability to scrutinize the contents of the 3,000 containers that are scanned daily. With one gram costing the equivalent of one month’s minimum wage, cocaine—unlike heroin—is inaccessible to the poor majority of Pakistan. But it is becoming trendier among those who can afford it. “Cocaine is definitely fashionable, especially among young people seeking to escape,” said Hussain, a young executive who returned to Pakistan after studying overseas. “There is nothing else to do.”

If you support prohibition then prepare yourself for even more death, corruption, sickness, imprisonment, unemployment, and the complete loss of the rule of law.

Neurotics build castles in the sky, psychotics live in them; the concept of a “Drug-Free Society” is a neurotic fantasy and Prohibition’s ills are a product of this psychotic delusion.