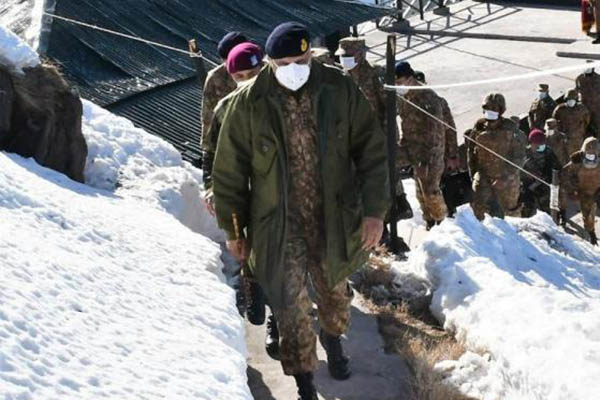 During visit to forward troops deployed along LoC, Chief of the Army Staff says Indian Army will get ‘befitting’ response to any aggressive act

The Pakistan Army shall take measures to protect the lives of innocent civilians living along the Line of Control (LoC), Gen. Qamar Javed Bajwa said on Tuesday, as he visited forward troops deployed along the disputed border in Pakistan-administered Jammu and Kashmir.

During his visit, the Chief of the Army Staff was briefed on the latest situation in the disputed territory, according to a statement issued by the Inter-Services Public Relations (ISPR). He was also informed about Indian ceasefire violations, which have deliberately targeted innocent civilians along the LoC, as well as the recent targeting of a U.N. vehicle by Indian troops against all international norms and conventions.

Appreciating the operational preparedness and high morale of the troops, Gen. Bajwa lauded the officers and soldiers for their continued vigilance and professionalism. “Indian provocations, particularly the recent targeting of UNMOGIP [United Nations Military Observers Group in India and Pakistan] vehicles are a threat to regional peace and stability,” he stressed.

The Army chief vowed that the Indian Army would always get a “befitting” response to any misadventure or aggression. He also stressed that the Pakistan Army would take all possible measures to defend the honor, dignity, and territorial integrity of Pakistan at all costs.

The COAS’ visit came within hours of Indian troops committing another unprovoked ceasefire violation in the Hotspring and Jandrot sectors along the Line of Control. In the latest act of aggression, Indian troops targeted civilians with mortars and heavy weapons, leaving a 50-year-old woman dead and three others injured, including a 4-year-old child. The ISPR said that the injured had been evacuated to a nearby medical facility for necessary treatment.

According to local media, the shelling also caused material losses to the villagers in all affected areas, damaging at least seven houses and killing five cattle.