Home Latest News ‘Pakistan Army Will Preserve Its Own Dignity’

‘Pakistan Army Will Preserve Its Own Dignity’ 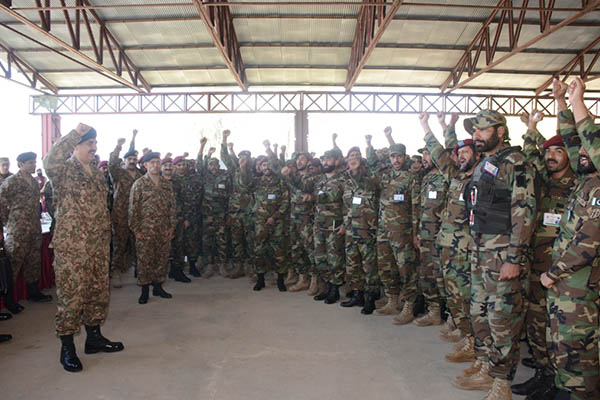 Chief of Army Staff Gen. Raheel Sharif tells soldiers the military will continue to deliver on its mission to ensuring security of Pakistan.

The Pakistan Army upholds the sanctity of all institutions and will resolutely preserve its own dignity and institutional pride, Chief of Army Staff Gen. Raheel Sharif told soldiers at the Ghazi Base in Tarbela on Monday.

Responding to concerns from soldiers on criticism of the armed forces, Sharif said the Pakistan Army drew its strength from national support. “Pakistan Army has contributed immensely toward national security and nation building and will continue to deliver on its mission,” he added.

Sharif said the Army “never has and never will shy away from rendering any sacrifice in ensuring formidable defense and security of the motherland.”

Praising the Special Service Group (SSG), he acknowledged the cadre’s success in fighting terrorists. “Pakistan Army takes pride in our brave and battle hardened Special Services Group who are ranked among the top elite forces of the world,” he added.

Sharif’s statement has been seen by many analysts as a veiled reference to the ongoing treason trial of ex-Army chief Pervez Musharraf. Since the former president’s formal indictment several politicians and political pundits have criticized Musharraf’s inability to attend court proceedings due to security and health concerns, terming him “cowardly.”

VENDETTA CAN NEVER LEAD IN POLITICS TOWARDS PROGRESS AND DEVELOPMENT.