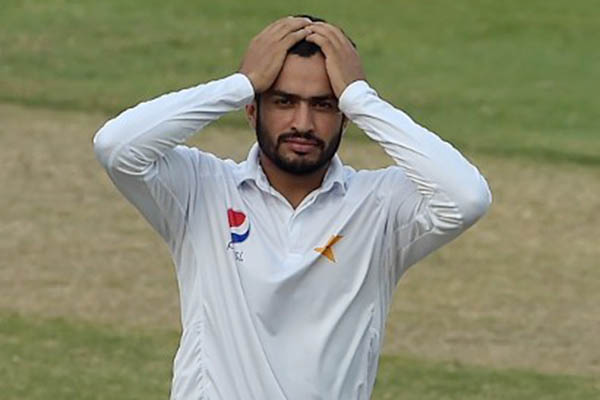 All-rounder also fined $2,000 for failing to disclose approach by bookmaker to engage in corrupt actions

The Pakistan Cricket Board (PCB) on Wednesday banned all-rounder Mohammad Nawaz for one month and fined him approximately $2,000 after he admitted failing to disclose an approach by a bookmaker to engage in corrupt practices.

The 23-year-old, regarded as a bright prospect for Pakistan, was part of the Twenty20 squad in the West Indies in March but returned home without playing a match. He becomes the second casualty of a wide-ranging investigation after fast-bowler Mohammad Irfan was banned for six months with six suspended and fined one million rupees ($10,000) after admitting to similar charges.

Four other players—Sharjeel Khan, Khalid Latif, Nasir Jamshed and Shahzaib Hasan—are also under investigation by a three-member tribunal and are provisionally suspended.

The cases pertain to corruption in the Twenty20 Pakistan Super League (PSL) held in United Arab Emirates in February to March this year. The PCB has so far not revealed any details about the cases, including the identities of the bookmakers, what they asked players to do, and the amounts involved—though unconfirmed reports have cropped up in the local media.

“Nawaz was charged with a single violation, on one occasion, which he failed to disclose to the PCB vigilance and security department, full details of the approaches and invitations received by him to engage in corrupt conduct,” the PCB said in a statement issued on Wednesday. It added that the player’s admission of guilt had led to a lighter sentence.

Nawaz, who appeared for the Quetta Gladiators in the PSL, has so far played three Tests, nine one-day internationals and five Twenty20s. His last international outing came during an ODI in Pakistan’s tour of Australia in January.

If found guilty, the four remaining players face bans ranging from five years to lifetime, because their charges related to more serious offenses and they have not admitted their guilt.

Meanwhile, the PCB fined batsman Umar Akaml and fast bowler Junaid Khan after they clashed when Akaml missed a Pakistan Cup match due to health problem. Akmal, captaining Punjab, suggested he was missing the match deliberately, prompting Khan to use a video statement to angrily hit back.

“The PCB has imposed a fine of 50 percent of the match fee to Umar and Junaid for their misconduct at the Pakistan Cup held last month in Rawalpindi,” said a PCB release. “The Board has also warned the two players that they will be under observation for a month starting May 18 and reoccurrence of breach of discipline will lead to one month suspension.”

Akmal has been involved in various discipline breaches in the past, including a brawl with a traffic police official in 2014 which landed him in jail for one day.