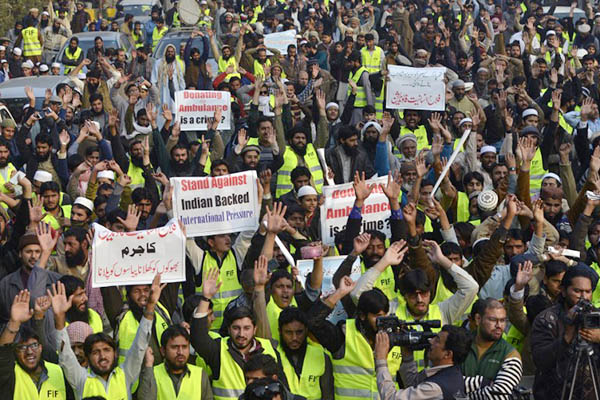 Jamaat-ud-Dawa activists at a protest in Lahore, January 2018. Arif Ali—AFP

Under changes to anti-terror laws, any individual listed as a terrorist by the U.N. will also be banned in Pakistan

Pakistan has quietly amended its anti-terror laws to ban those listed as terrorists by the United Nations, a move which paves the way for Islamabad to proceed against suspected masterminds of the 2008 Mumbai attacks.

The change was made by President Mamnoon Hussain on Friday, and published by the law ministry late Monday. “The amendment means that all individuals and entities listed by the United Nations also stand banned under Pakistani laws now,” a senior government official told AFP.

He declined to say what actions were being taken after the change, and analysts said it was unclear why it was needed when Pakistan is already a member of the U.N.

The move comes after Washington piled pressure on Pakistan last November to take action against Hafiz Saeed, the alleged mastermind of the Mumbai attacks, which killed 166 people, after he was released from house arrest in Lahore.

Pakistan says there is not enough evidence to charge him, and denies harboring militants. However, the White House has said that freeing him “belies Pakistani claims that it will not provide sanctuary for terrorists.”

Security analyst Amir Rana said the Pakistani move might have been in anticipation of the meeting in Paris next week of the Financial Action Task Force (FATF), an inter-governmental organization to combat money laundering and terrorist financing.

Saeed heads the charity Jamaat-ud-Dawa (JuD), believed to be a front for Lashkar-e-Taiba (LeT), a militant group that battles Indian troops in disputed Kashmir and was blamed for the Mumbai attacks. Six Americans were among those killed during the three-day siege in Mumbai, when gunmen who arrived by sea sparked battles with Indian commandos.

The drama brought India and Pakistan to the brink of war.

Saeed, who has a $10 million U.S. bounty on his head, has denied involvement. He was listed by the U.N. in December 2008 for being associated with Taiba, as well as having links to the Al Qaeda terror network and Taliban militants.

JuD is similarly listed by the U.N. as a terrorist group. No officials from the charity were immediately available for comment.

Barring notable exceptions, even ‘liberal’ intellectuals were in the habit of jumping to the defence of ‘Hafiz saab’. When a Federal Minister questioned the policy of sheltering the now-declared-terrorist, he was promptly declared traitor. How long will this fig leaf hold? May be till February 23 when the Financial Action Task Force plenary session will conclude. It is clear that this knee-jerk reaction is an attempt to avoid being grey listed on the basis of the resolution sponsored by US and others at this session. Islamabad will breathe easy once this cloud passes over.