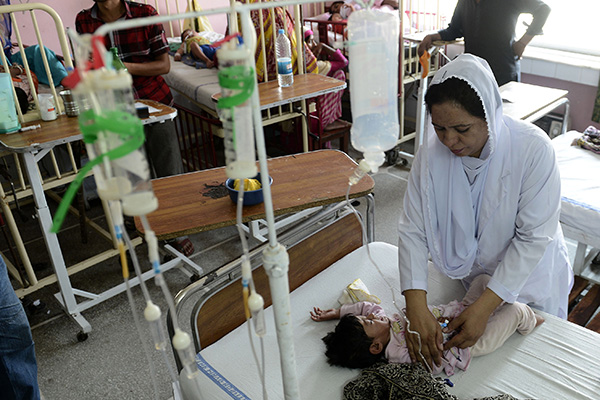 In the intensive-care ward of Lahore’s Mayo Hospital, pale, spotty children cry in the intense heat of the summer—victims of a devastating measles outbreak.

Lahore, capital of the Punjab, has borne the brunt of the epidemic. It has 18,000 of the 25,000 cases reported around the country by provincial health authorities and more than 150—all children—of the 495 deaths.

According to health experts, ineffective vaccination programs and poor monitoring of the disease have led to the contagious disease running rampant. “Initially people were unaware about this epidemic, so they tried to treat the disease at home and using local street doctors,” said Dr. Iftikhar Mirza, a spokesman for Mayo, Lahore’s main public hospital. “They were even unaware about the vaccination. So, when they came to us, the children were in a critical condition and many had already died.”

Asad Abbas, a laborer, tried to treat the disease, spread by droplets from the nose or mouth of infected people, with traditional methods and sought proper medical treatment only just in time. “The red spots appeared on my 6-year-old grandson’s body some days back. We took it lightly and got him treated from a homeopathic practitioner,” he said. “Then he started vomiting and his energy vanished. When we brought him here, he was about to die. But after treatment over here, he is okay now.”

Dr. Muhammad Younas, an official from the Directorate General of Health in the Punjab, said the province had seen 17,985 measles cases this year, with 158 deaths. “This is the worst situation in five years and we can confidently say that the number of these cases is much higher than during the previous five years,” he said.

Last year there were 310 measles deaths in Pakistan, according to the World Health Organization, described in January by a health ministry official as “a record high.” WHO uses a more conservative count of cases and deaths, but even by its measure 2013 is on track to be far worse than 2012. Since the start of the year, WHO has recorded 12,951 measles cases and 290 deaths across Pakistan—compared to 14,984 cases and 310 deaths in the whole of last year.

WHO says three consecutive years of severe flooding, which put Pakistan’s health system under severe strain, have helped measles cases rocket from 4,321 in 2010 to the current alarming figure.

Pakistan has a network of vaccination centers for mothers and newborns, and issues vaccination cards for children who are born in hospitals or seen by doctors after birth. But many women—like Asad Abbas’s daughter—give birth at home and do not see a doctor either during or after pregnancy.

The measles vaccine is cheap—less than a dollar per child according to WHO—but two shots are recommended to prevent outbreaks, as around 15 percent of children do not achieve immunity with a single dose. An official with the U.N. Children’s Fund in the Punjab said missed vaccinations had built up over the years to create the current outbreak. “Some children could not be immunized even after vaccination and many others have issues of malnutrition, so all these cases accumulate after five years and the disease turns out as an epidemic. This is what has happened this time,” the official said on condition of anonymity.

Jaffer Ilyas, a spokesman for the Directorate General of Health, said the province had vaccinated 2.6 million children in response to the epidemic. Punjab Chief Minister Shahbaz Sharif has declared a “war against measles” and the province hopes to have the outbreak under control within weeks, Ilyas added.

Pakistan to Allow Private Firms to Set Own...