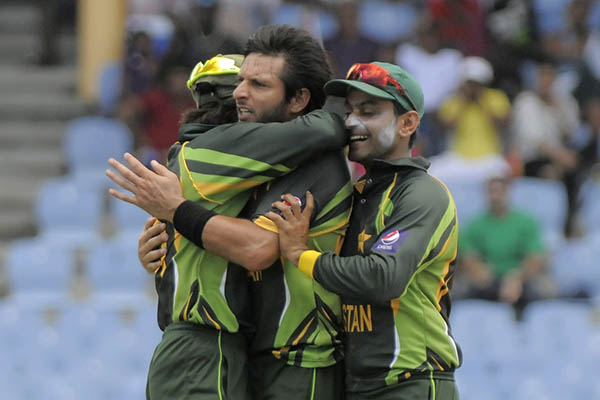 Visiting team beat a revised target of 189 off 31 overs after two rain showers delayed the match.

Inclement weather, the Duckworth/Lewis method and a lightning assault by Pakistan’s middle-order batsmen stole the thunder from the West Indies as the visitors snatched the rain-affected fourth one-day international by six wickets on Sunday.

In a match already reduced to 49 overs-per-side and after Marlon Samuels blazed an unbeaten 106 in the home team’s total of 261 for seven, Pakistan were set a revised target of 189 off 31 overs as a second shower of the day interrupted play when they were 68 for two off 17 overs.

Needing a further 121 off 14 overs, half-centuries from Mohammad Hafeez and skipper Misbah-ul-Haq sped the visitors to the target with one over to spare.

“It was like a T20 game when we came back out,” said a delighted Misbah after his key role in the victory. “Mohammad Hafeez and I realized that we just had to play normal cricketing shots and look for the odd boundary. It was a case of not panicking and just staying focused on the target.”

Following a tie in the third match two days earlier, Pakistan now have an unbeatable 2-1 lead going into the fifth and final match at the same Beausejour Stadium venue on Wednesday.

West Indies seemed a dejected bunch when they took the field after being told by the umpires of the revised target, and Pakistan capitalized, with Hafeez and Misbah crashing 54 runs off five overs before home captain Dwayne Bravo tried to get his team back into the match.

Hafeez fell to Kemar Roach for 59, an innings decorated by five fours and two hooked sixes off fast-medium bowler Jason Holder, while Bravo himself accounted for Shahid Afridi who was promoted up the order to accelerate Pakistan’s scoring.

However, new batsman Umar Akmal (29 not out) maintained the required scoring tempo and with Misbah showing his remarkable versatility in speeding along to 53 off 43 balls at the other end to keep his team well on course, it was left to Akmal to finish off the match with three consecutive boundaries off the disheartened West Indies captain.

“When we came back on the field after the recalculation, two of our main bowlers (Roach and Sunil Narine) had already bowled five overs so we were virtually without their services at this crucial stage,” said Bravo, who conceded 49 runs off six overs.

Earlier, Samuels played his best, stroking four sixes and nine fours off 104 balls during the midday sunshine. He put on 95 for the fifth wicket with Lendl Simmons, who supported Samuels’ classy assault with a belligerent 46 off 44 balls.

West Indies made two significant decisions before a single ball was bowled as they replaced hard-hitting Kieron Pollard with Devon Smith and demoted Chris Gayle to number five in the batting order in light of his continuing struggle for runs against the new ball. He was back in the middle at 63 for two after Smith fell to Mohammad Irfan and Johnson Charles was trapped leg-before-wicket by Wahab Riaz.

Although far from his best, Gayle contributed 30 to a 57-run third-wicket stand with Samuels before failing to clear long-on off the bowling of Shahid Afridi.