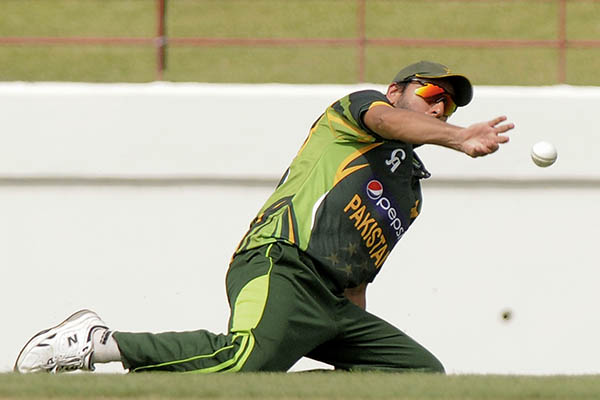 Shahid Afridi crowned man of the match, but newcomer Zulfiqar Babar scored six on the final ball of the match.

Zulfiqar Babar completed a dream debut by striking the final ball of the match for six to give Pakistan a two-wicket victory over the West Indies in the first Twenty 20 international at the Arnos Vale Stadium on Saturday.

Having taken three wickets for 23 runs with his left-arm spinners in helping to restrict the world champions to 152 for seven, the 34-year-old newcomer then made the winning hit off Marlon Samuels with the scores level to hand the home side their first defeat in this form of the game since they lifted the world title last October in Sri Lanka.

Pakistan now has the chance to displace the West Indies in second spot in the international rankings with a win in the second and final match at the same venue on Sunday.

Shahid Afridi, who became the first player to hit 400 sixes in an international career during his innings, was named man of the match for his 46 off 27 balls, but even he conceded that Babar was the man of the moment.

West Indies were rocked onto the back foot at 42 for four after choosing to bat first, Pakistan captain Mohammad Hafeez taking the critical wickets of openers Johnson Charles and Chris Gayle, before Babar made an immediate impact by bowling Lendl Simmons in his first over.

He then also bowled out Samuels and Dwayne Bravo, but not before Bravo and Kieron Pollard put on 56 for the fifth wicket.

“I was really happy to see the desire to win from the players, especially the newcomers in the side,” said a relieved Hafeez. “It was always going to be tough to get a target like that on this pitch, but I was really impressed with the way Umar Amin played and then Shahid Afridi brought it home.”

Kieron Pollard, returning to something like his best form after an atrocious run in the preceding one-day series, finished unbeaten on 49 for the West Indies but was over-shadowed by skipper Darren Sammy who smashed 30 off just 14 balls and dominated a 53-run sixth-wicket stand.

Like the West Indies, Pakistan also got off to a poor start before another newcomer, Umar Amin, marked his first T20 international with a polished 47, the highest score by a Pakistani on debut.

However, he was the primary scorer until Afridi came to the crease and rode his luck in typical flamboyant style to tilt the balance Pakistan’s way.

Windies skipper Sammy engaged in some peculiar tactics in the critical final stage of the match. Apart from choosing not to bowl himself, despite his one over earlier costing just four runs, he persisted with Shannon Gabriel, who had already cost his team several runs, for the penultimate over.

The fast bowler bowled out Afridi but the move proved costly, spraying an additional three wides down the leg-side to ease Pakistan towards their target.

“We should have been able to defend that total,” said Sammy. “We gave away too many runs early on and could have fielded a lot better. I thought Gabriel with his extra pace would have made the difference at the death but it didn’t work out that way.”

Simmons ran out Saeed Ajmal with the scores level, but West Indies’ hopes of pulling off a tie, as they did in the ODI a week earlier in St. Lucia, were ended by Zulfiqar’s heave back over the bowler’s head.