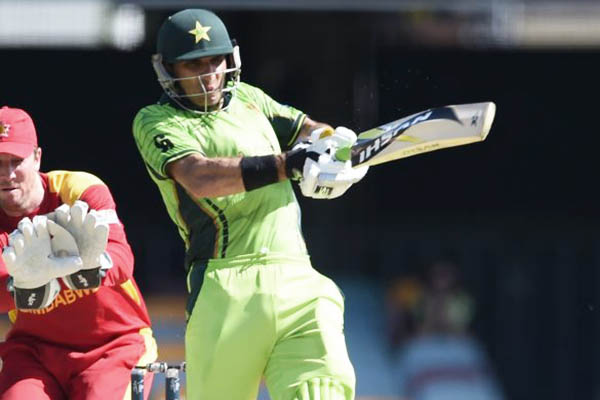 National team back on track after a dismal start to the international cricket tournament.

Pakistan got their World Cup campaign back on track Sunday when the 1992 champions downed Zimbabwe by 20 runs to claim their first win of the tournament.

Led by some patient batting from captain Mizbah-ul-Haq, who made 73, Pakistan recovered from losing their first two wickets for just four runs to post 235 for seven from their 50 overs. Towering left arm paceman Mohammad Irfan then took full advantage of the lively Gabba wicket to claim the first three Zimbabwe scalps on his way to a career-best 4-30.

After posting what appeared to be a below par total, Irfan gave Pakistan the ideal start when he dismissed the two Zimbabwe openers in a lethal first spell. The 7’1’’ tall Irfan troubled the Zimbabwe openers with his bounce, both Chamunorwa Chibhabha and Sikandar Raza guiding lifting balls to Haris Sohail at second slip.

However, Haq brought Irfan back after 21 overs with immediate dividends, as Masakadza was caught out after an attempted pull shot to the captain at midwicket.

The in-form Sean Williams joined Taylor and the pair added 54 in quick time as Zimbabwe looked headed for victory. But moments after reaching his 32nd ODI half century, Taylor attempted a leg glance only to get a tickle through to keeper Umar Akmal to leave the Zimbabweans 128-4, but still well in control.

However, when they lost Williams for 33 after he hit Rahat Ali straight to Ahmad Shahzad at backward point with the score on 150 the run chase began to fall away. Irfan then had Solomon Mire caught behind to leave Zimbabwe 166-6, still 70 runs short of victory with 13 overs remaining.

Skipper Elton Chigumbura, who tore the quadriceps in his left leg while fielding, was clearly hampered with his running between the wickets and the required run rate began to climb steadily.

Craig Ervine (14) and Tawanda Mupawira both went out after being caught behind off Riaz with the score on 168 and despite a late flourish from Chigumbura (35), Zimbabwe struggled to lay bat to ball in the closing overs.

Earlier, Pakistan recovered from another terrible start to post a competitive 235-7, thanks largely to Haq and a whirlwind 54 off 46 balls from Riaz. Haq strode to the crease with his side in desperate trouble at 4-2 at the end of the fourth over and was out 121 balls later in the 47th with Pakistan 202-7.

Riaz struck his maiden half-century at the end of the innings to lift Pakistan, who struggled throughout their 50 overs against a spirited Zimbabwe attack.