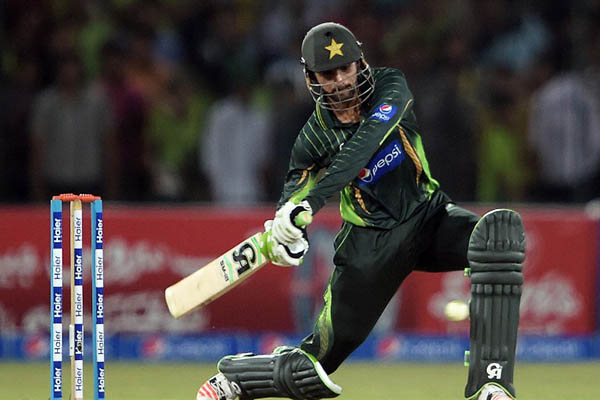 Shoaib Malik hit his first century in six years to help Pakistan outbat Zimbabwe in the first day-night international by 41 runs in Lahore on Tuesday, taking a 1-0 lead in the three-match series.

Malik, playing his first one-dayer after two years, notched up a 76-ball 112 with 12 fours and two sixes to steer Pakistan to 375-3—their highest against Zimbabwe—before restricting the tourists to 334-5 in 50 overs at Qaddafi Stadium.

Zimbabwe tried their valiant best with skipper Elton Chigumbura hitting a rapid 95-ball 117 but the mounting asking rate proved too much in the end. Chigumbura hit 10 boundaries and four sixes in his maiden one-day century as Zimbabwe also improved on their previous highest total against Pakistan, beating 295-9 in Bulawayo in 2002. Chigumbura added 124 for the third wicket with Hamilton Masakadza (73) and another 74 for the fourth with Sean Williams (36).

Chigumbura was bowled in the 45th over by paceman Wahab Riaz who was the best Pakistan bowler with 3-47. Chigumbura’s previous best was 90 he made against South Africa at Bulawayo last year.

Pakistan captain Azhar Ali attributed the win to team effort. “We got a good start and everyone chipped in with Malik build on that for our big total which won us the match,” said Ali. “It was a good team effort.”

Chigumbura praised his team’s fight but blamed poor bowling for the loss. “We did well in the chase but didn’t go hard in the last seven overs,” said Chigumbura. “It was satisfying to score a hundred but we must improve our bowling in the next matches.”

Earlier, Malik scored his first century since his three-figure knock against India at Centurion in September 2009. Malik built on a confident 170-run opening stand between Mohammad Hafeez (86) and Ali (79) as Pakistan improved on their previous best total against Zimbabwe of 349 at Jamaica in 2007.

Malik’s hundred—his first in 31 innings and since September 2009—came off 70 balls as Pakistan added 112 in the last 10 overs. Malik, 33, was dismissed off the last delivery, caught in the covers off Tinashe Panyangara.

Malik had been part of a 201-run stand with Haris Sohail (89 not out), a new record for the third wicket against Zimbabwe beating the 145 runs which Javed Miandad and Amir Sohail put on at Hobart in 1992. Sohail’s knock came off 66 balls with six boundaries and two sixes.

Zimbabwe are the first major team to tour Pakistan since terrorist attacks on the Sri Lankan team bus in March 2009 led to the suspension all international cricket in the country. Massive security continued to be deployed at the stadium and for the teams, with 24,000 people watching the match.

Ali and Hafeez gave Pakistan early momentum as they batted solidly during their 26 over stand. Utseya then dismissed both the openers off successive deliveries with Ali caught off a miscued sweep while Hafeez missed a straighter delivery and was bowled. Ali hit nine fours and two sixes while Hafeez knocked eight boundaries and four sixes.

The next two matches will be played on Friday and Sunday—also in Lahore.