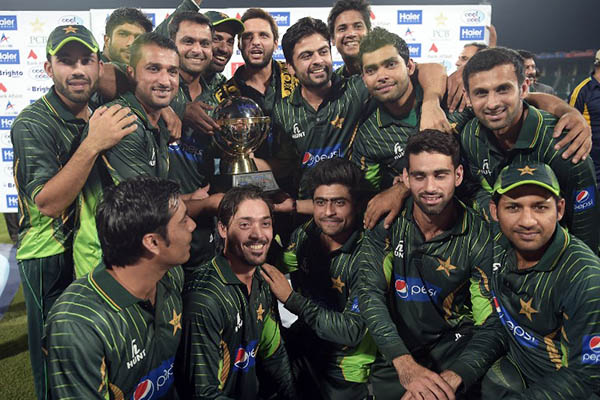 Pakistan pulled off a sensational last-over win by two wickets in the second Twenty20 international against Zimbabwe in Lahore on Sunday to take the two-match series 2-0.

With 12 needed off last paceman Brian Vitori’s last over, No. 10 Bilawal Bhatti hit a six and four besides taking a double to help Pakistan overhaul a stiff 176-run target in 19.4 overs.

The win added to Pakistan’s joy as the series marked the return of international cricket in Pakistan six years after terrorists attacked the Sri Lankan team bus in Lahore in 2009. Heavy security continued to remain alert with 4,000 policemen guarding the stadium as helicopters provided air coverage for both teams’ arrival in the evening. Zimbabwe only agreed to tour after the Pakistan Cricket Board guaranteed foolproof security normally reserved for heads of state.

Mukhtar, who made a quick 45-ball 83 in the first match, put on 44 by the fifth over with Ahmed Shehzad (18) and another 37 with debutant Nauman Anwer (18) before Pakistan lost four wickets in quick succession.

Mukhtar, dropped on 15 and 55, holed out at mid-on before Shoaib Malik, Shahid Afridi—who both made seven each—and Umar Akmal (30) fell to leave Pakistan needing 24 in the last 4.1 overs.

Mukhtar smashed six boundaries and a six off 40 balls. Anwar Ali (two) and Mohammad Rizwan (six) fell in the space of five balls before Bhatti’s heroics sealed the win for Pakistan.

The 2-0 win keeps Pakistan’s fifth place in the Twenty20 rankings intact while Zimbabwe remained as low as 12th.

Zimbabwean allrounder Sean Willaims said his team gave away the match. “We are not satisfied with the result,” said Williams, who took two wickets besides his half-century. “We were short on few runs in both the matches and dropped catches did not help us today.”

Earlier, Williams hit a rapid 32-ball 58 not out with seven boundaries and a six and opener Vusi Sibanda 46-ball 49 to help Zimbabwe to a solid 175-3 after winning the toss.

Sibanda added an invaluable 68 for the opening stand with fellow opener Hamilton Masakadza (39) before adding the same tally with Williams as Pakistani bowlers struggled to stop the flow of runs.

Masakadza hit three successive boundaries off seamer Bilawal Bhatti before he holed out off spinner Shoaib Malik who took 1-23 in his four overs. Sibanda hit two boundaries and a six before becoming Afridi’s first wicket in the last three Twenty20 matches.

Williams hit Afridi for six to reach his maiden fifty off just 26 balls, improving on his previous best T20 score of 38 made against Bangladesh in Khulna nine years ago. Elton Chigumbura lifted the score by hitting three successive sixes in paceman Mohammad Sami’s over. Chigumbura made 21 off just nine balls.

Both teams will now play three one-day internationals on May 26, 29 and 31.