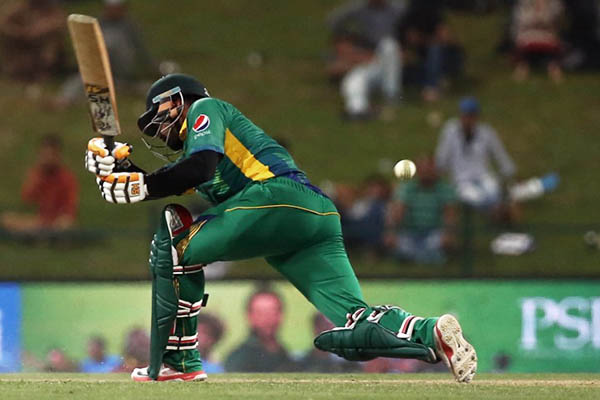 Mohammad Hafeez hit a sparkling century to help Pakistan beat England by six wickets in the first day-night international at Abu Dhabi on Wednesday, taking a 1-0 lead in the four-match series.

The 35-year-old finished with an unbeaten 130-ball 102 to steer Pakistan to the modest target of 217 in 43.4 overs, carrying his batting form from the preceding 2-0 Test series win last week into the limited-overs clash. Hafeez added 106 for the unbroken fifth wicket stand with Babar Azam (62 not out) and 70 for the fourth wicket with Shoaib Malik (26).

Eoin Morgan and James Taylor hit half centuries for England in a below-par total of 216 all out in 49.4 overs.

Hafeez and Malik steadied Pakistan to 111 before Malik fell to a reckless shot off spinner Moeen Ali. Malik, after scoring 10 runs, completed 6,000 one-day runs in his 229th match. He is the ninth Pakistani batsman to score 6,000 or more one-day runs. Hafeez, who hit 151 in the third Test in Sharjah last week, completed his tenth one-day century off 127 balls. He hit ten boundaries and a six.

Azam also impressed, hitting Chris Woakes for a straight six to complete his second one-day fifty, off just 55 balls. In all he hit four sixes and two fours in his run-a-ball knock.

Hafeez dedicated his hundred to the retiring Younis Khan. “I want to dedicate this hundred to Younis who has been a role model for all of us,” said Hafeez of the senior batsman. “We want to win it for him and I am happy to have contributed in this win.”

England skipper Morgan said his side’s batting had let them down. “We were quite a few runs short and with less than 220 on the board, you can’t blame the bowlers, so there is a lot to learn and pick before the next game,” said Morgan.

England, who won the toss and batted, struggled against Pakistan’s bowling, which was led by Mohammad Irfan who took 3-35. Morgan top-scored with 76 while Taylor made 60 as the pair added 133 for the fourth wicket as the only highlight of the innings.

England got off to a disastrous start when Irfan produced a sharp delivery to bowl opener Jason Roy with only the second ball of the game. Joe Root also failed as he fell leg-before to seamer Anwar Ali for nought and it became 14-3 when Anwar forced an edge off Alex Hales (10) to slip where Younis took the catch at the second attempt.

Morgan and Taylor were left to steady the innings. The England skipper reached his 29th one-day half-century with a sweetly timed four off spinner Bilal Asif—his eighth 50 in the last 11 matches.

From a well-set 147-3 in the 31st over, England lost four wickets in the space of 14 runs off 32 deliveries with two going to Shoaib Malik. Morgan hit 11 fours in his 96-ball knock while Taylor smashed two sixes and three fours off 82 deliveries.

Morgan edged Malik to wicketkeeper Sarfraz Ahmed to start the slide and three balls later Jos Buttler (one) failed to make his ground while taking a sharp single.

Malik removed Taylor in his next over while leg-spinner Yasir Shah chipped in with the wicket of Moeen for seven. Woakes (33 not out) and David Willey (13) added an invaluable 33 for the ninth wicket to get England past the 200-mark before Irfan returned to take his third wicket in the penultimate over.

The second match will be played at the same venue on Friday.