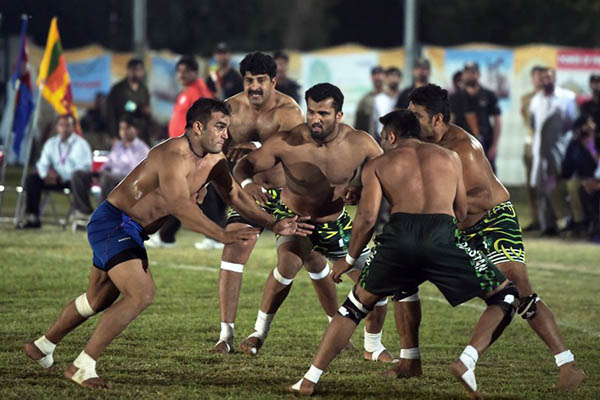 Pakistan beat India at the Asian Kabaddi championships near Islamabad late Friday, retaining its title and bringing a rare example of an international tournament held in militancy-wracked Pakistan to a successful end.

In the final match of the tournament, in which Iran, Afghanistan, Sri Lanka and Nepal also participated, Pakistan defeated rivals India by 50-31.

The tournament, part of Indian and Pakistani attempts to revive the traditional circle form of kabaddi, was watched by thousands of spectators who braved security checks to reach the ground inside the Wah cantonment, a military town which is a hub for ordnance factories near the capital Islamabad.

“It’s a great feeling to win the Asian title at our home surface. This happened because Pakistan Kabaddi Federation (PKF) provided us enough training facilities,” said Musharraf Janjua, one of Pakistan’s best players. “It’s good that our traditional circle style Kabaddi is being revived. I would request the government to provide more funds to the federation to enable it to organize more international championships in Pakistan and promote this traditional sport,” he told AFP after the final match.

International Kabaddi Federation (IKF) President J. S. Gehlot, who comes from India, backed the PKF. “We can be two countries, there can be political things, but in our sport, we are two brothers,” he said at closing ceremony of the championship.

The tournament was a rare chance for Pakistan to showcase international sport at home. Few international tournaments in any sport are held in Pakistan due to security fears over the country’s more than decade-long fight against militancy.

Kabaddi originated in the subcontinent and later spread to the other Asian countries. In its original format, two teams of 11 gather inside a 22-meter diameter circle divided by a line in the middle.

During the 40-minute game, a lone player from one side will attempt to cross the line and tag an opponent before racing back to his team’s half and safety, as the person tagged tries to stop him. Whoever succeeds in the wrestling match that ensures scores a point for his team.

Great to see this manly sport at its best!
It certainly promotes healthy zeal among youth if society….. Hope this economical sport is afforded with sufficient support at all levels!!!
Munawar Arain, Canada