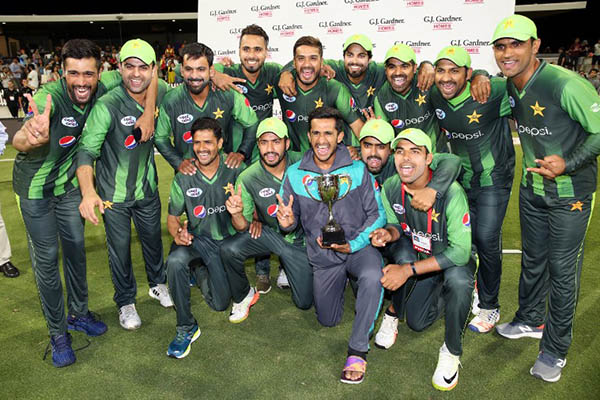 Pakistan laid claim to being the best Twenty20 side in the world on Sunday after beating New Zealand in the series-deciding final Twenty20 match in Mount Maunganui.

The 18-run victory gave Pakistan a come-from-behind 2-1 series win that will see them overtake New Zealand at the top of the world T20 rankings.

An animated captain Sarfraz Ahmed leapt with delight and punched the air after the final ball as Pakistan pulled off back-to-back wins over the hosts. It marked an incredible comeback for the tourists who were whitewashed in the five-match one-day series on arrival in New Zealand and lost the first Twenty20.

“It was a tough tour for us because… we lost the [ODI] series but T20s is a totally different format,” said speedster Mohammad Amir, who won the man-of-the-series award. “It is very special for all Pakistani people.”

Ahmed praised the team effort and the way his side refused to be bowed after a disappointing start to the tour. “They way we came back after 6-0, credit goes to my boys. They worked really hard and now we are again number one.”

Batting first on a friendly wicket, Pakistan reached 181 for six with opener Fakhar Zaman making 46 off 36 at the top of the innings. With wickets in hand, Umar Amin was able to lead a late charge that saw 58 runs scored in the final four overs.

New Zealand, in reply, were never up with the run chase, and managed 163 for six in their 20 overs. The defeat followed a 48-run loss in the second Twenty20, which ended a 13-match winning streak across all formats, and put a dampener on New Zealand’s preparation for next month’s triangular series with Australia and England.

Zaman was the architect at the start of the Pakistan innings with a sharp 46 before being dismissed in a debatable decision when Tom Bruce took a catch at ground level. Television replays were inconclusive on whether the ball touched the grass, and after lengthy deliberations the third umpire ruled in favor of the on-field decision.

New Zealand managed to arrest Pakistan’s brisk early run rate in the middle of the innings until Amin lashed out. His 21 came off the first five balls in an over from Ish Sodhi before the New Zealand spinner claimed the wicket off the final delivery. Haris Sohail chipped in with 20 off 12 balls while Aamer Yamin, replacing the injured Hasan Ali, faced six deliveries for his 15.

New Zealand struggled from the start of their reply to get near the required run rate of more than nine an over, and were in early trouble when Williamson was out for nine.

Martin Guptill attempted to bully the bowlers but it was primarily a lone stand. When he was removed for 59 off 43 balls in the 13th over, the required run rate had shot up to 13.57. Ross Taylor put the ball over the boundary fence three times in his 25 off 10 balls. But with his dismissal in the 17th over, New Zealand were 128 for five and their hopes of a miraculous comeback were over.