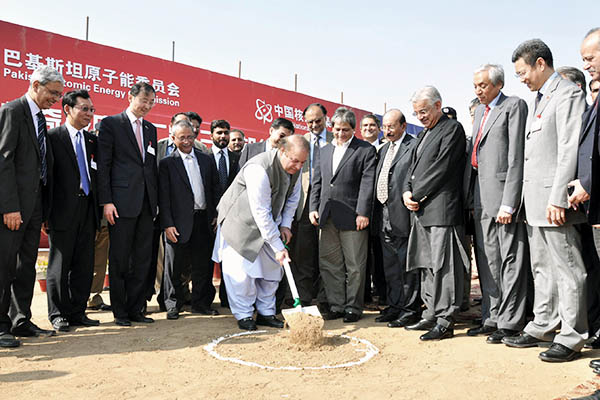 Chinese-built power project expected to be commissioned in 2019 near Karachi.

Spade in hand, Pakistan’s Prime Minister Nawaz Sharif broke ground on Tuesday for the Coastal Power Station, which is to be built some 40 kilometers from Karachi with Chinese assistance under the auspices of the Pakistan Atomic Energy Commission.

The 2,200-megawatt nuclear-power plant at Paradise Beach is set to be Pakistan’s fourth and largest. Pakistan currently draws 740 megawatts of electricity from nuclear energy. Sharif has said he wants to set up six additional plants to ramp this up to 40,000 megawatts by 2050. It remains unclear whether the cash-strapped government will be successful in doing so.

The Coastal Power Station project, initiated by former president Pervez Musharraf, will cost Pakistan almost $10 billion and is expected to be commissioned by 2019. Sharif, who was elected in June, will fight for reelection in 2018, by which time he expects Pakistan’s power outages to have been dramatically reduced.

“This is one of the first steps of our goal of racing toward an [outages]-free Pakistan,” Sharif told the audience at the site of the plant. His government hopes nuclear power will help the country withdraw its overreliance on expensive electricity produced from imported furnace oil.

His plans for six additional nuclear plants may not materialize. Pakistan, which is not a party to the nuclear Non-Proliferation Treaty, is excluded from international trade in nuclear materials and technology, and can rely only on its neighbor China for help. China has said it does not envisage working on any more such projects in Pakistan.

Sharif is also hoping to add another 6,600 megawatts to the national grid from coal. This project at Gadani has been fiercely criticized by environmentalists who say the planned facility will irreparably harm the environment and air quality in close-by Karachi.

We are satisfied by our Prime Minister performance. We pray for our great PM. He will do everything what he promise to public. Best of Luck PM…..Allah help you…
Load Shedding free Pakistan…..INSHALLAH

We all Pakistani hope that we are able to achieve what we have planned and that this government and those coming after this, work for the betterment of the country.