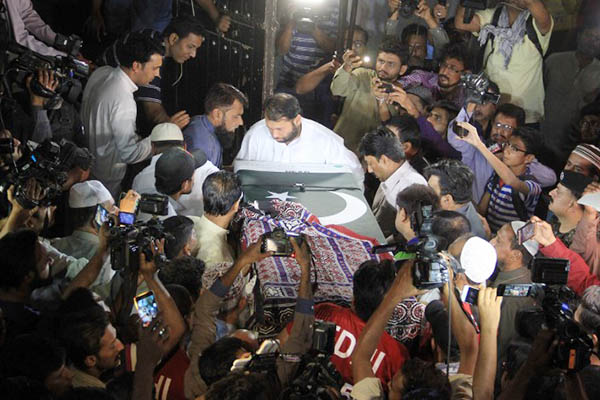 Hundreds mourned a Pakistani exchange student killed in a mass shooting at a Texas high school last week during her burial in Karachi on Wednesday.

Sabika Sheikh was among the 10 people gunned down at a high school in Santa Fe last Friday when a heavily armed student opened fire on classmates.

Relatives sobbed and hugged each other as Sheikh’s remains arrived at her family home in a casket draped with a Pakistani flag. The body was then taken to a public meeting ground where hundreds gathered to say prayers and pay their respects before the burial at a nearby cemetery.

“My daughter is a martyr and martyrs don’t die,” Sheikh’s father Abdul Aziz said after the prayers.

Officials participating the ceremony labeled her killing an act of terrorism. “The whole nation stands by the Pakistani girl who was martyred in a terrorist attack in the U.S. May God give patience to her parents and family,” provincial governor Mohammad Zubair told reporters after the funeral.

Hours earlier, a Pakistani honor guard escorted Sheikh’s casket off a plane at Karachi’s Jinnah International airport during a ceremony overseen by government officials and U.S. consul John E. Warner. Following the funeral, Pakistani Nobel laureate Malala Yousafzai—who was shot by the Taliban in 2012 for advocating girls’ rights to education—also weighed in, calling for an end to school violence.

“I hope leaders in the U.S., Pakistan and around the world will do justice to the lives of Sabika, her classmates and their teachers by doing more to stop violence in schools,” said Yousafzai in a statement.

Sheikh had been in the U.S. on a State Department-sponsored exchange program but was due to return home in mere weeks ahead of Eid-ul-Fitr, the holiday marking the end of the holy Muslim month of Ramzan.

Despite strained relations between Washington and Islamabad, the U.S. has long been a favored destination for Pakistani students studying abroad, with thousands enrolling in American schools every year.

Sheikh’s death came just three months after another school massacre in Parkland, Florida killed 17 people, sparking an unprecedented grassroots, student-led gun control movement. The shooting in Santa Fe was the 22nd such incident at a U.S. school this year, according to media reports, a disturbing statistic in a country where firearms are part of everyday life and there are more than 30,000 gun-related deaths annually.