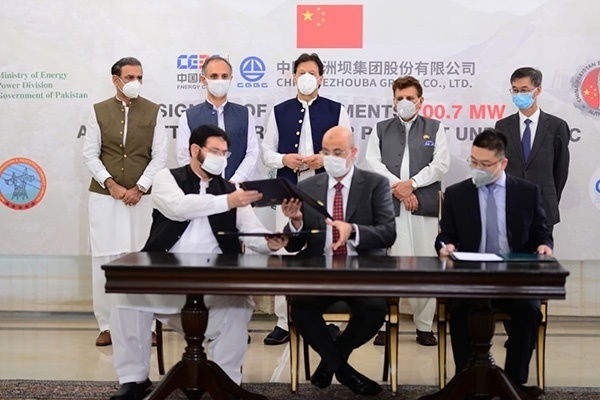 P.M. Khan says CPEC is the future of Pakistan is address at signing ceremony

Pakistan and China on Monday signed an agreement for the construction of the $1.5 billion Azad Pattan Hydropower Project.

After witnessing the signing of the agreement between Islamabad and China Gezhouba in Islamabad, Prime Minister Imran Khan said the China-Pakistan Economic Corridor (CPEC), under which the project is being undertaken, is the “future of Pakistan.” He said it would prove a milestone for development and prosperity of the region, adding that Islamabad could learn a lot from Beijing on how best to develop its economy.

The prime minister said CPEC reflected economic cooperation between Pakistan and China, and said time would prove its long-term benefits. Referring to the Azad Pattan agreement, Khan said it was part of an investment to complete a power project based upon clean energy.

Khan regretted that the country could not compete with its neighboring states in terms of generating low-cost energy, adding that hydroelectric power was considered a major source of clean energy that was in line with the government’s ‘Clean and Green Pakistan’ policy. He claimed it would help reduce the impact of global warming.

CPEC Authority Chairman Asim Saleem Bajwa said the project would be completed utilizing indigenous resources. He said work on CPEC projects was continuing without hindrance despite the COVID-19 pandemic, claiming this was generating job opportunities.

According to Bajwa, Islamabad has inked agreements to bring $4 billion of investment and generation of 1,800MW low-cost power in Pakistan in the last 10 days alone. These projects would provide jobs to about 8,000 locals, he claimed.

The Azad Pattan Hydropower Project would generate 700.7MW of electricity and requires no fuel import. It is located at River Jhelum, and it expected to be completed in 2026.