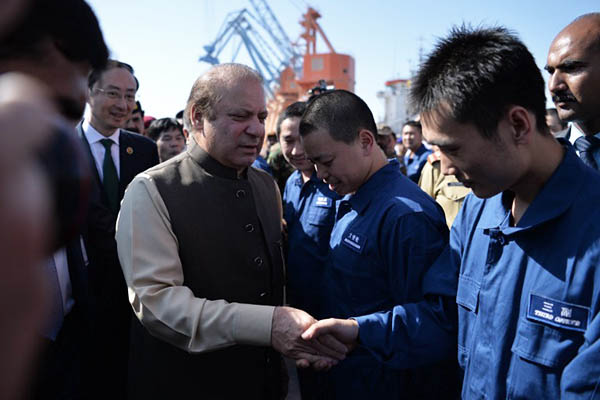 From Chinese city of Kashgar to Balochistan’s Gwadar port, the route is a key part of ongoing CPEC project.

Prime Minister Nawaz Sharif on Sunday inaugurated a trade route linking Gwadar port to the Chinese city of Kashgar as part of a joint multi-billion-dollar project to jumpstart economic growth in Pakistan.

The Cosco Wellington, a ship berthed at the deep-sea port in Balochistan province, was loaded with over 150 containers—the first consignment under the China-Pakistan Economic Corridor announced in 2014, which aims to link the Asian superpower’s Xinjiang region with the Arabian Sea.

The $46 billion project is an extension of China’s “One Belt, One Road” initiative and encompasses a series of infrastructure, power and transport upgrades that Islamabad hopes will kickstart its long-underperforming economy. “The participants of the pilot convoy who have made it to Gwadar are the harbingers of development and progress, that this region is to see soon,” Prime Minister Nawaz Sharif told audience members at a ceremony that was also attended by Army chief Gen. Raheel Sharif and senior Chinese officials. “Their faces gleam with the beam of prosperity that CPEC will bring about in the years to come,” he said, calling the first shipment a “watershed event.”

Pakistan recorded a 4.7 percent growth in gross domestic product for the fiscal year that ended in June 2016, and Prime Minister Sharif has set an ambitious target of 5.7 percent for the current year.

With its dusty moonscape and shining new port, officials have repeatedly suggested the city of Gwadar is another Dubai in the making. But the mineral-rich province in which it is located is beset by violence from Islamist groups as well as insurgents seeking a greater share of the region’s natural resources and secession from Pakistan.

Security problems have mired CPEC in the past with numerous attacks by separatists, but China has said it is confident the Pakistani military is in control.

On Saturday, at least 52 people were killed and dozens of others wounded in a massive suicide attack at a shrine of the Sufi saint Shah Noorani, some 750 kilometers south of provincial capital Quetta.

The assault was the second claimed by the Islamic State group in the province in as many months, in what some analysts see as a sign of its growing regional influence.