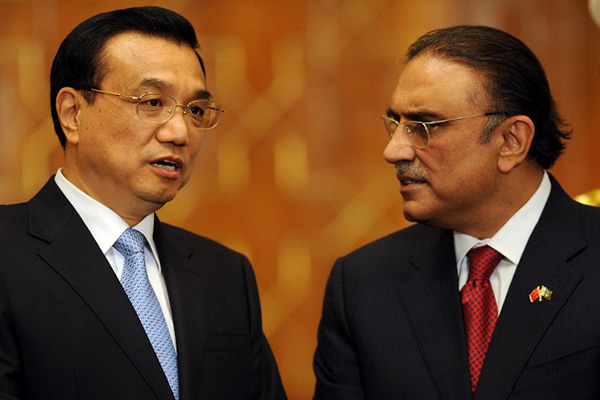 Chinese Premier Li Keqiang on Wednesday linked growth in his country’s restive west with that in Pakistan, saying the two sides wanted to create an “economic corridor” to boost development.

Li, on his first overseas trip since taking over in a once-in-a-decade power transfer in Beijing, congratulated Pakistan on its recent general elections and hailed the countries’ longstanding friendship.

The Chinese leader held talks with President Asif Ali Zardari and officials signed a series of memorandums of understanding on economic, science, technology, and energy issues.

Prime Minister-elect Nawaz Sharif, set to meet Li on Thursday, will doubtless be hoping the visit leads to closer trade ties after his Pakistan Muslim League (Nawaz) party swept to victory in the May 11 general elections on a promise to revitalize the struggling economy. The PMLN faces a daunting array of problems: a bloody Islamist militancy, sluggish economic growth, high inflation, a crumbling currency, the threat of a balance of payments crisis, and crippling electricity shortages.

Trade between China and Pakistan hit an annual $12 billion for the first time last year, according to Islamabad’s foreign ministry, and the two sides plan to raise this to $15 billion in the next two to three years.

Li said China’s desire to boost domestic demand and develop its western region would benefit Pakistan as it seeks to restart its foundering economy. “Both sides are of the view that by connecting China’s development and Pakistan’s development, we can create a joint economic corridor linking the central and western parts of China and Pakistan,” he said. “This vision, once realized, will have great strategic significance for the development of China, South Asia, Asia and of peace and stability in the region and the improved lives of people in our region.”

China’s western region of Xinjiang sees frequent clashes between mainly Muslim Uighurs and Han Chinese, and Beijing has blamed extremists trained in Pakistan for some of the violence. Riots in Xinjiang’s capital Urumqi in 2009 killed around 200 people, leading the ruling Communist Party to tighten surveillance and boost investment in the region.

There are an estimated 10,000 Chinese people and more than 120 Chinese companies in Pakistan, many working on infrastructure and energy projects. Beijing built two nuclear power plants in the country and is contracted to construct two more reactors.

In February, Beijing took control of Pakistan’s port of Gwadar, which through an expanded Karakoram Highway could connect China to the Arabian Sea and the Strait of Hormuz, a gateway for a third of the world’s traded oil. China is also the main source of arms for Pakistan’s military, the country’s dominant institution, and Pakistan accounted for more than half of Chinese weapons exports between 2008 and 2012, according to the Stockholm International Peace Research Institute.

Li was met by Zardari on the tarmac at Nur Khan airbase in Rawalpindi next to Islamabad when he flew in from India, where he promised to open China’s vast domestic market wider to Indian goods.

Pakistan’s former ambassador to the United States Tariq Fatemi said the visit was crucial in drawing the economic roadmap for the incoming government. “Normally foreign visitors don’t go to countries during the interim setups, but China has recognized that the visit to Pakistan is necessary even at this stage, and that is why they have organized a separate one-on-one meeting with Nawaz Sharif,” said Fatemi.

After Pakistan, Li’s tour takes him on to Europe for visits to Switzerland, with which China is negotiating a free trade agreement, and Germany, its largest European trading partner.