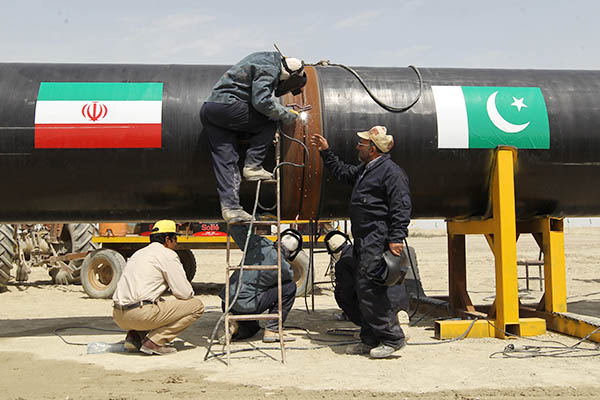 Petroleum minister says Iran-Pakistan gas pipeline cannot be abandoned because ‘we need it.’

Pakistan insisted Thursday it was still keen to press ahead with a troubled pipeline to bring gas from Iran, despite comments by an Iranian minister that he had no hope for its completion.

The $7.5-billion project, aimed at easing Pakistan’s chronic gas and electricity shortages, has drawn threats of U.S. sanctions and run into repeated problems.

The Iranian side is almost complete but Pakistan has struggled to find the money to pay for the 780-kilometer section to be built on its side of the border.

Earlier this month Islamabad asked Tehran to stump up $2 billion to finish construction.

Iranian Oil Minister Bijan Zanganeh said Wednesday there was no hope of exporting gas to Pakistan because the financing was not there.

But his Pakistani counterpart insisted the project would be completed.

“There is absolutely no chance to abandon the pipeline project, because we need it,” Petroleum and Natural Resources Minister Shahid Khaqan Abbasi told GeoTV.

A foreign ministry spokesman said Pakistan was “committed to all options” to tackle energy shortages, which cause long blackouts in the summer and problems with gas supply in the winter.

With the economy and government finances in a poor state, if Iran will not pay to complete the pipeline it is unclear where Pakistan could find the money it needs.

Investors and other governments are reluctant to get involved in the project because of the threat of breaching international sanctions on Iran.

Last week the Sustainable Development Policy Institute, an Islamabad-based think-tank, warned that under the current terms of the deal Pakistan would pay an exorbitant price for Iranian gas.

Arshad Abbasi, an energy specialist at the institute, voiced surprise at the Iranian minister’s comments and said he thought it was likely a bargaining gambit as Tehran seeks to stop Pakistan negotiating a lower price.