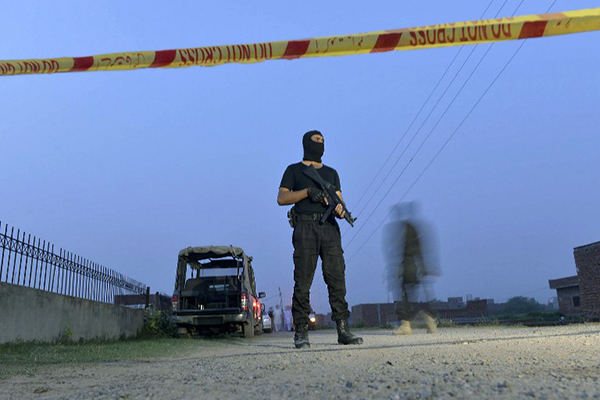 Cordon outside the house raided on June 29. Arif Ali—AFP

Pakistani officials on Wednesday said they had killed a senior Al Qaeda commander and three other militants in a raid earlier this week near Lahore.

“One of the four militants killed on Monday during a raid of law enforcement agencies near Lahore was the head of Al Qaeda networks in Pakistan and in Punjab province and his name was Abdali,” Shuja Khanzada, the Punjab home minister said.

Officials said they were acting on a tip-off when they raided the militants’ hideout and had received intelligence that the group was planning an attack on the provincial headquarters of the Intelligence Bureau (IB), Pakistan’s civilian intelligence agency. Al Qaeda’s South Asian branch leader, Maulana Asim Umar, was the “mastermind of the plan,” Khanzada said.

The claim could not be independently verified.

Two more militants were injured in the raid and arrested, the minister added, saying they had all trained in Afghanistan in an Al Qaeda camp for five months.

Punjab-based militant groups have deepened their ties with the Taliban, which is allied to Al Qaeda, in recent years, though the province, which is the stronghold of the ruling party, has largely been spared the violence that has plagued much of the rest of the country.

Pakistan’s Army has been waging an offensive against militant strongholds in the tribal areas bordering Afghanistan since June last year. It claims it has killed more than 2,700 militants and destroyed more than 800 of their hideouts.

PAKISTAN HAS TWO CHOICES . EITHER IT WELCOMES IS AND HAVE A KHALIFA RULED ISLAMIC STATE OR TOTALLY END TERROT INCLUDING THOSE IT DESCRIBE AS NON-STATE ACTORS. BECAUSE MOST WILL JOIN ISIS .