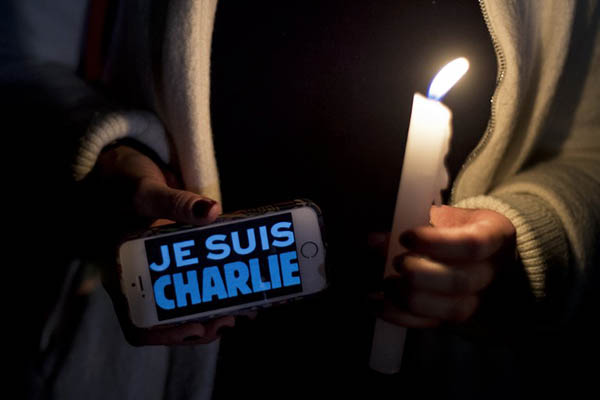 Censure comes as police find body of elderly man who was acquitted of blasphemy charges earlier this year.

Pakistan on Thursday condemned as “terrorism” an attack on a French magazine that has outraged some Muslims for its irreverent cartoons of Islam’s Prophet, despite its own laws declaring blasphemy punishable by death.

Masked gunmen burst into the offices of the Paris headquarters of Charlie Hebdo magazine on Wednesday morning, killing 12 people including some of France’s most outspoken journalists, in the country’s bloodiest attack in half a century.

“Pakistan condemns the brutal terrorist attack in Paris that resulted in the loss of many lives and has left several others injured,” Pakistan’s Ministry of Foreign Affairs said in a statement. “Pakistan deplores terrorism in all its forms and manifestations. We extend our condolences to the government and people of France on the loss of life.”

Islamabad’s condemnation comes at a time when blasphemy laws are being increasingly invoked against Pakistan’s beleaguered minorities, with rights groups claiming they are abused to settle personal scores. A U.S. government report last year found Pakistan’s use of laws forbidding any insult to Islam or its Prophet was “incomparable” to any other country, listing 14 people on death row.

In neighboring Afghanistan, where rallies were held against the same magazine in 2012, President Ashraf Ghani branded the attack as “heinous.”

“Killing of defenseless people and civilians is a heinous act of terror, there is no justification for this heinous act,” he said in a statement.

The Afghan Taliban meanwhile published an article on their website describing the killings as “an alarm bell for those who have in the past insulted Islam,” but stopping short of openly supporting the attack.

In September 2012, between 200-300 people marched through Kabul to protest the publication of new cartoons of Islam’s Prophet by Charlie Hebdo, as well as the distribution of an American anti-Islam film Innocence of Muslims.

Charlie Hebdo, a French weekly magazine, has long provoked controversy by mocking many religions with provocative drawings, a practice that has outraged some Muslims, whose religion forbids depictions of their Prophet.

Police have detained seven people as part of a manhunt for two brothers suspected of carrying out the attack, one of whom is a jihadist who has been well-known to anti-terror forces for many years.

Blasphemy is a hugely sensitive topic in Pakistan, where even unprovoked allegations can lead to mob violence. On Thursday, police said they had recovered the body of a man convicted of blasphemy for claiming prophet-hood, who had been released months earlier for being mentally ill.

The bullet-riddled body of Ghulam Abid, who was said to be around 60 years old, was found along a railway track in the town of Taxila on Wednesday, said police investigator Mohammad Ayub.

“He was released from jail in Ramzan because he was a mental patient and it is quite possible that he was targeted for the crime he had committed,” he added. Nisar Ahmed, another police official, confirmed the murder.

Local media reported that after Abid’s body was recovered, a mob prevented his family from burying him in the community’s graveyard due to the blasphemy allegations. He was buried in his own home’s backyard, they added.