The total number of deaths linked to Pakistan’s coronavirus pandemic climbed to 1,017 on Thursday, as the country reported another 32 fatalities in the preceding 24 hours. During the same time, 2,193 new infections were recorded, raising confirmed cases to 48,091.

Prime Minister Imran Khan, launching a TeleHealth portal to provide free medical consultations to Pakistani citizens, reiterated that the country would now “have to learn to live with coronavirus.”

Despite claiming last week that the country’s healthcare infrastructure has no danger of being overburdened as the coronavirus situation is “now under control,” the premier warned that if the rapid spread of cases was not curtailed, the country would soon run out of healthcare professionals.

More than 500 healthcare workers across Pakistan have contracted the novel coronavirus since the country reported its first case in February. Experts have repeatedly warned that doctors are at most risk due to their status as front-line workers and warned that if they are not adequately protected, it risks the situation spiraling out of control.

Railways Minister Sheikh Rasheed Ahmed, relaunching train services on Wednesday, sought to justify the department continuing to offer air conditioned bogies by claiming, wrongly, that the coronavirus did not spread in such situations.

According to the World Health Organization, the virus fares better in cold conditions, and that air conditioning can blow droplets further than six feet, potentially endangering an entire car. The SOPs issued for public transport resumption in Punjab and Khyber-Pakhtunkhwa specifically note that vehicles’ ACs must be switched off to curb the spread of the coronavirus.

The Punjab government on Wednesday relented to transporters’ demands and granted exemptions to SOPs introduced just 4 days back to curb the spread of the novel coronavirus. Under the new agreement, GT Road routes would offer a 20 percent discount in fares, while there would be no discount on motorway routes. Meanwhile, a key social distancing requirement has been done away with entirely, allowing the buses and vans to operate at 100 percent occupancy.

Provincial authorities granted permission for congregational prayers for Eidul Fitr on Wednesday, saying safety precautions would be implemented to curb the spread of COVID-19.

The total number of confirmed COVID-19 cases in the province on Thursday morning rose to 18,964. Additionally, the province raised its casualties to 316, while its recoveries rose to 5,645. Overall, the province now has 13,003 active cases of the novel coronavirus. 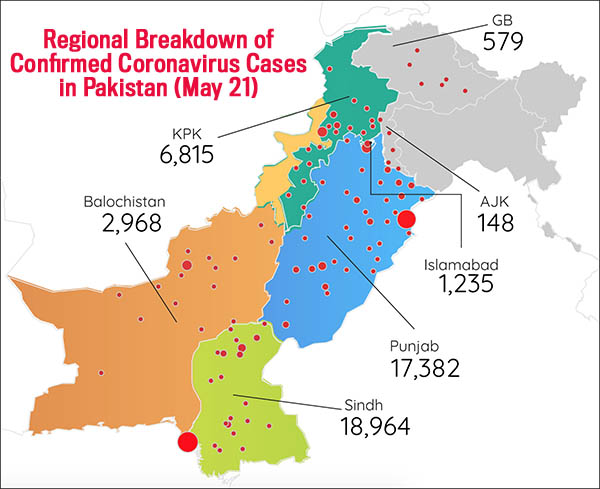 The province has announced that it would allow all retail shops to remain operational over Eidul Fitr, claiming the step is being taken in light of Supreme Court directives. However, the apex court has already clarified this order only applies till Eid and is now applicable once the festival starts.

The province recorded 6 new deaths from the novel coronavirus in the 24 hours preceding Thursday morning, bringing to 351 the total number of people dead.

Authorities also said the province now has 6,815 confirmed cases, with 2,130 recoveries. There are currently 4,334 active cases in the province.

The province has thus far reported 2,968 confirmed cases of the novel coronavirus, with 38 deaths and 636 recoveries. It currently has 2,294 active cases of COVID-19.

A lawmaker from the Balochistan Assembly on Wednesday died after testing positive for COVID-19 last week. Syed Fazal Agha, a former governor of Balochistan, was shifted to Karachi after his health deteriorated and passed away while being treated.

Islamabad on Thursday raised its confirmed COVID-19 infections to 1,235, with 10 deaths and 151 recoveries. Presently, the Islamabad Capital Territory has 1,074 active cases of the novel coronavirus.

In Gilgit-Baltistan, cases of the novel coronavirus rose to 579, with no new deaths and 12 recoveries. Overall, it now has 4 deaths and 402 recoveries, leaving 173 active cases.

In Pakistan-administered Kashmir, the total number of confirmed cases has increased to 148. The region has recorded no new deaths and 2 new recoveries in the past 24 hours, leaving it with 1 death and 79 recoveries. There are currently 68 active cases of the virus in the disputed region.

Globally, the virus has now infected more than 5,090,060 people, with over 329,730 reported deaths. Governments across the world have halted flights, locked down towns and cities and urged people to stay at home, but there are signs of easements to help shuttered economies recover. Overall, around 2,024,230 patients of the 5 million+ infected have recovered thus far.