Nationwide, there have been 224 reported deaths and 2,337 recoveries from the deadly virus

Confirmed cases of the novel coronavirus in Pakistan rose on Thursday to 10,513, with the National Institute of Health reporting that 224 people had died due to the virus thus far and 2,337 had recovered.

There are currently 7,952 active cases in the country, 568 more than there were 24 hours ago. According to the NIH, 6,700 tests were administered in the past 24 hours, a significant improvement from the roughly 3,000 of a week ago. However, a lot more work is required if the government hopes to achieve its target of testing 20,000 people per day by the end of the month—a week from now.

On Wednesday, a group of prominent doctors in Karachi warned that hospitals were running out of beds and urged the government to strengthen the ongoing lockdowns instead of easing them. A spokesman of the ruling government has dismissed the statements by frontline workers in the fight against COVID-19, branding their heartfelt pleas a ‘political’ effort.

Meanwhile, Prime Minister Imran Khan has tested negative for COVID-19. The premier was urged to get himself tested after philanthropist Faisal Edhi tested positive less than a week after meeting him. Due to the incubation period of COVID-19, Khan should be entering quarantine for another week to ensure his own safety and that of those around him. However, the government has not issued any statement to this effect.

According to provincial Chief Minister Usman Buzdar, there were 17 patients in critical condition on Wednesday night against overall confirmed infections of 4,590. The country’s most populous province also reported 5 new deaths in the past 24 hours, and 66 recoveries, raising its casualty count from 51 to 56 with 790 total recoveries. It currently has 3,744 active cases, 191 more than a dar earlier.

The province continues to report the largest number of cases in Pakistan, though the data is partially skewed due to the presence of the Tablighi Jamaat in Raiwind and quarantine centers housing returning pilgrims from Iran.

Of the reported 4,590 cases, 1,838 are from among the general population, with provincial capital Lahore comprising the bulk of that number with 772 patients. Gujranwal, with 115 cases, and Rawalpindi with 195 have also seen jumps in infections in recent days. According to the government’s official COVID-19 portal, Lahore is now responsible for 23.68 percent of all cases in Pakistan, up from 23.58 percent a day earlier.

Provincial capital Karachi is now responsible for 14.97 percent of all confirmed coronavirus cases in Pakistan, down from 15.25 percent a day earlier. According to the provincial Health Department, of the 3,373 confirmed cases in the province, 2,207 have been recorded in Karachi, of which 277 have recovered and 64 died. The metropolis has 1,866 active cases of the virus, 253 more than a day earlier.

Overall, Sindh has recorded 69 deaths, three more than a day earlier and still the country’s second highest provincial death toll due to COVID-19. It also has 715 recoveries, leaving 2,589 active cases.

With 83 deaths, 3 more than a day earlier, Khyber-Pakhtunkhwa continues to exhibit the highest fatality rate caused by COVID-19 in Pakistan. The province on Wednesday night reported that it had recorded 86 new confirmed cases of COVID-19 and 79 new recoveries. Overall, the province has reported 1,453 cases of the coronavirus, 83 deaths, and 414 recoveries. It currently has 956 active cases, 26 more than 24 hours ago. 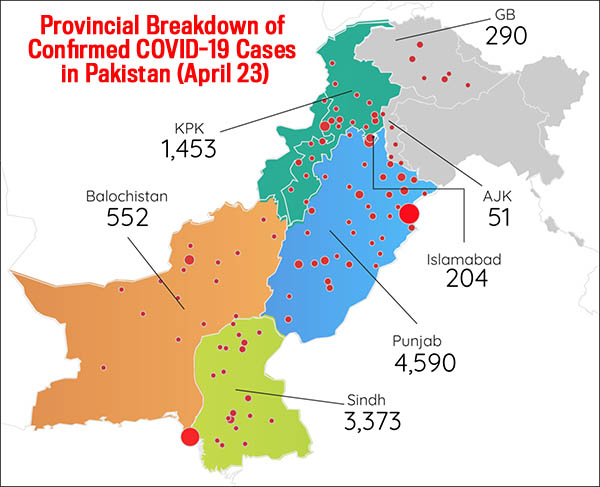 In a bid to curb the local spread of COVID-19, which provincial spokesman Liaquat Shahwani says is primarily responsible for new recorded cases, the government is the first to extend its lockdown to May 5.

Overall, the province has now reported 552 confirmed cases of COVID-19, with 8 deaths and 168 recoveries. It currently has 376 active cases, 54 more than it did a day earlier.

Provincial authorities have warned that Balochistan likely has far greater numbers than have currently been reported, but their efforts have been hampered due to lack of testing kits. Shahwani told a private broadcaster earlier this week, that thousands of kits provided by the federal government had lacked the necessary equipment to administer the tests—an allegation also leveled by the Sindh government.

The Islamabad Capital Territory on Wednesday reported that the confirmed number of COVID-19 cases had increased to 204, with no new deaths or recoveries. The federal capital has thus far reported 3 deaths and 26 recoveries, leaving 175 active cases, 10 more than 24 hours ago.

In Gilgit-Baltistan, the infections rose by 7 to 290, with no new deaths and 3 new recoveries. Overall, 3 deaths have been reported from the region and 201 recoveries, leaving 86 active cases, 4 more than 24 hours earlier.

Pakistan-administered Kashmir has reported no new infections, deaths or recoveries in the past 24 hours, sustaining its tally from a day earlier: 51 patients and 23 recoveries, leaving 28 active cases.

Globally, the virus has now infected more than 2,638,470 people, with over 184,248 reported deaths. Governments across the world have halted flights, locked down towns and cities and urged people to stay at home, but there are signs of easements to help shuttered economies recover. Overall, around 721,990 patients of the 2.6 million+ infected have recovered thus far.