Confirmed COVID-19 cases in Pakistan rose to 11,155 on Friday morning, leaving 8,391 active infections—439 more than a day earlier—after authorities reported the overall death toll had risen to 237 with 2,527 recoveries.

According to the government’s official dashboard, there were 190 new recoveries and 642 new infections in the past 24 hours. Doctors from the Pakistan Medical Association on Thursday warned that the rapid pace at which the virus was spreading required the state to establish its writ.

In a press conference in Lahore, senior doctors urged the government against easing lockdowns and urged it to implement stricter restrictions on all large gatherings, including religious congregations. In a pointed message to Prime Minister Imran Khan—who maintains that more people would die of hunger than coronavirus if the government fully implemented lockdowns advised by healthcare professionals—a senior doctor said that no one had died of hunger in the past month of lockdowns; over 200 people had died of the coronavirus.

Separately, the prime minister participated in a live telethon across multiple platforms on Thursday evening, and urged Pakistanis both at home and abroad to donate generously to his COVID-9 Relief Fund. According to the government, around Rs. 2 billion has been allocated through donations.

In a post on Twitter, provincial Chief Minister Usman Buzdar said that there were 20 patients in critical condition on Thursday night, three more than had required intensive care a day earlier. Overall, the province has 4,767 confirmed infections.

The country’s most populous province also reported 9 new deaths in the past 24 hours, and 115 recoveries, raising its casualty count from 56 to 65 with 905 total recoveries. It currently has 3,797 active cases, 53 more than a day earlier.

Of the reported 4,767 cases, 1,998 are from among the general population, with provincial capital Lahore comprising the bulk of that number with 885 patients, 113 more than it had reported a day earlier.

According to the provincial Health Department, of the 3,671 confirmed cases in the province, 2,449 have been recorded in Karachi, of which 283 have recovered and 67 died. The metropolis has 2,099 active cases of the virus, 233 more than a day earlier.

Provincial health minister Dr. Azra Pechuho has warned that a massive spike in cases is expected next month and urged people to practice social distancing and avoid any and all large groups of people.

The northern province recorded 2 more deaths in the past 24 hours, raising its fatality count to 85—the highest in Pakistan right now. Health and Finance Minister Taimur Jhagra has said that the province has raised its testing capacity to 1,500 tests/day and is also proceeding to pool testing to overcome deficiencies in capabilities.

He told a press conference that the provincial government wanted to double its testing capacity further within the next two weeks. 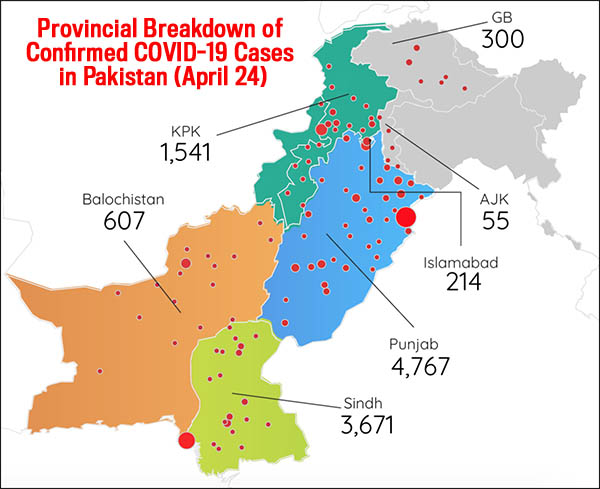 The rapid spread of COVID-19 in Pakistan’s largest province has prompted authorities to implement strict preventative measures for anyone not staying at home. Provincial spokesman Liaquat Shahwani said on Twitter that anyone seen not wearing a facemask in public would be placed under arrest and shifted to a quarantine center.

Overall, the province has now reported 607 confirmed cases of COVID-19, with 8 deaths and 174 recoveries. It currently has 425 active cases, 49 more than it did a day earlier. Per the Balochistan Health Department, the recovery rate of patients in the province is currently 28.6 percent, while the fatality rate is 1.31 percent. It said that 67 percent of reported cases have been found in provincial capital Quetta, adding there had been at least one case found in every district of the province, raising fears over local transmission.

The federal capital on Friday reported that the confirmed number of COVID-19 cases had increased to 214, with no new deaths or recoveries. Islamabad has thus far reported 3 deaths and 26 recoveries, leaving 185 active cases, 10 more than 24 hours ago.

In Gilgit-Baltistan, the infections rose by 10 to 300, with no new deaths and 11 new recoveries. Overall, 3 deaths have been reported from the region and 212 recoveries, leaving 85 active cases, 1 less than 24 hours earlier.

Pakistan-administered Kashmir has reported 4 new infections, and 2 new recoveries in the past 24 hours, raising its overall cases to 55, with 25 recoveries. The region currently has 30 active cases, 2 more than a day earlier.

Globally, the virus has now infected more than 2,725,920 people, with over 191,060 reported deaths. Governments across the world have halted flights, locked down towns and cities and urged people to stay at home, but there are signs of easements to help shuttered economies recover. Overall, around 745,900 patients of the 2.7 million+ infected have recovered thus far.