Government reports 281 deaths from the novel coronavirus and 3,029 recoveries

The tally of confirmed COVID-19 cases in Pakistan hit 13,328 on Monday morning, leaving 10,018 active infections after authorities reported the overall death toll had risen to 281 with 3,029 recoveries.

According to the government’s official dashboard, there were 163 new recoveries and 605 new infections in the past 24 hours. The rising tally is on track to match or slightly exceed government estimates, which had projected Pakistan’s total confirmed coronavirus cases to hit 15,000 by the end of April.

Amid the rising cases, Planning Minister Asad Umar has claimed that the spread of the novel coronavirus has slowed and increased testing capacity is actually responsible for the spiking numbers. However, he admitted, the actual number of cases if likely far higher than those reported by the government, as many cases are asymptomatic.

The country’s most populous province recorded 68 new infections on Sunday, against 57 recoveries, raising its net total of confirmed COVID-19 cases to 5,446. In the past 24 hours, Punjab has reported 2 new deaths, raising the number of casualties caused by coronavirus in the province to 83, currently the second-highest death toll due to coronavirus in Pakistan.

A majority of the cases—in both Punjab and Pakistan as a whole—are being reported from Lahore, with the provincial capital now solely responsible for 23.12 percent of the total number of confirmed coronavirus cases in the country.

According to the provincial Health Department, of the 4,615 confirmed cases in the province, 3,249 have been recorded in provincial capital Karachi, of which 385 have recovered and 75 died. The metropolis currently has 2,789 active cases of the virus.

The province continues to report the highest fatality rate in the country, hitting 98 on Sunday, just 2 short of the psychologically important 100.

Overall, the province has now reached 1,864 confirmed COVID-19 cases, with 515 recoveries. It currently has 1,251 active cases.

Overall, the province has now reported 781 confirmed cases of COVID-19, with 13 deaths and 176 recoveries. It currently has 592 active cases. Per the Balochistan Health Department, a bulk of the patients—over 80 percent—are being reported from provincial capital Quetta. 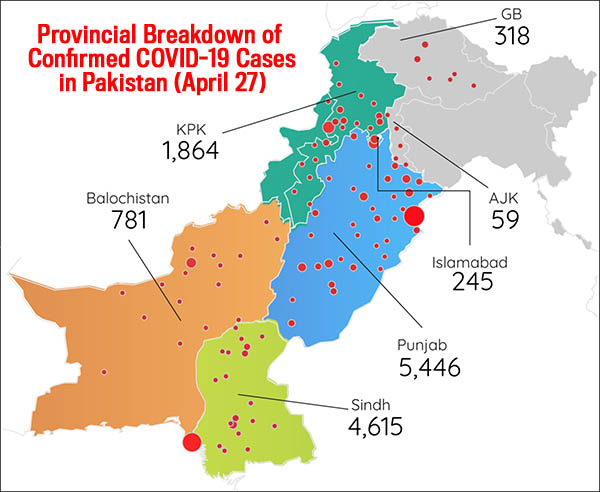 Islamabad on Monday morning reported that its confirmed number of COVID-19 cases had increased to 245, with no new deaths or recoveries. Overall, Islamabad has thus far reported 3 deaths and 29 recoveries, leaving 213 active cases.

In Gilgit-Baltistan, the infections rose to 318, with no new deaths and 3 new recoveries. Overall, 3 deaths have been reported from the region and 219 recoveries, leaving 96 active cases.

Pakistan-administered Kashmir has reported 4 new infections, and 3 new recoveries in the past 24 hours, raising its overall cases to 59, with 35 recoveries. The region currently has 24 active cases.

Globally, the virus has now infected more than 2,995,150 people, with over 207,000 reported deaths. Governments across the world have halted flights, locked down towns and cities and urged people to stay at home, but there are signs of easements to help shuttered economies recover. Overall, around 881,510 patients of the 2.9 million+ infected have recovered thus far.