Planning Minister Asad Umar on Sunday suggested to media that the government was considering reopening large segments of the economy from next week, as the “number of casualties will increase but not get out of hand.”

According to the federal minister, Pakistan’s healthcare facilities are sufficient to cope with the burden of the rising infections expected in May. However, he added, the fatality rate in the country is far less than that of western states, and Pakistan’s economy cannot afford to remain shut for much longer.

The country’s most populous province recorded 418 new infections in the past 24 hours, raising its total confirmed COVID-19 cases to 7,524. Punjab has also reported 4 new deaths, bringing its casualty count to 124.

Overall, the province has reported 2,667 recoveries, leaving 4,733 active cases. The majority of the cases continue to be reported from Lahore, with over 2,000 of the total infections having been found there.

Sindh Chief Minister Murad Ali Shah has announced that while the pace of recoveries is increasing—a positive sign—so is the pace of local transmission. Generally, he said, Sindh’s infection rate appeared to around 11 percent. “We have tried to contain it [local spread] but people do not care and violate the SOPs [standard operating procedures] and ignore social distancing,” he said, adding that the pandemic could only defeated through collective effort. 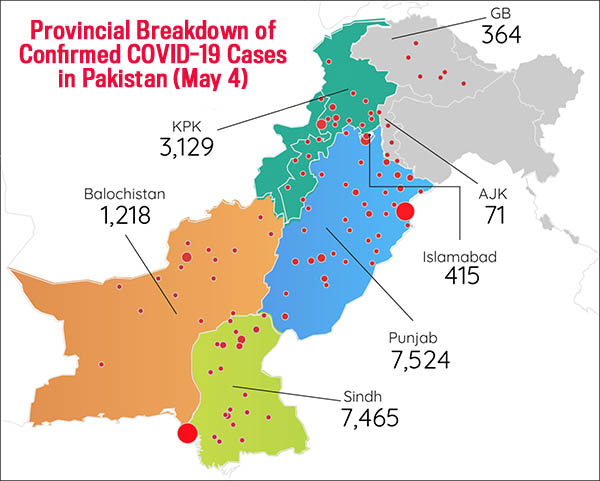 The province continues to report the highest fatality rate due to COVID-19 in Pakistan, with the tally climbing to 180 from 172 a day earlier. Overall, the province has now recorded 3,129 confirmed cases of the novel coronavirus, with 811 recoveries. It currently has 2,138 active cases.

The province has reported 1,218 confirmed cases of the novel coronavirus, with 21 deaths and 197 recoveries. It currently has 1,000 active cases.

The province has reported 2 new deaths in the past 24 hours.

Provincial government spokesman Liaquat Shahwani has said that of the 46 new cases reported in the past 24 hours, 44 were from Quetta, while 2 were from Pishin. He said 1,067 cases had been contracted through local spread.

In Gilgit-Baltistan, cases of the novel coronavirus rose to 364, with no new deaths or recoveries. Overall, 3 deaths have been reported from the region and 260 recoveries, leaving 101 active cases.

In Pakistan-administered Kashmir, the total number of confirmed cases hit 71, against 44 recoveries and 0 deaths. Overall, it has 27 active cases of the virus.

Globally, the virus has now infected more than 3,566,800 people, with over 248,300 reported deaths. Governments across the world have halted flights, locked down towns and cities and urged people to stay at home, but there are signs of easements to help shuttered economies recover. Overall, around 1,156,980 patients of the 3.5 million+ infected have recovered thus far.