Nationwide, there are now 21,501 confirmed cases of coronavirus, with 486 deaths and 5,782 recoveries

Pakistan’s confirmed cases of COVID-19 on Tuesday soared to 21,501, as authorities reported that 1,315 new infections had been found in the past 24 hours, the highest single-day spike in cases thus far. At the same time, recoveries climbed to 5,782, while the casualty count stood at 486, leaving 15,233 active cases of the virus in the country.

According to the National Institute of Health, the government recorded 192 new recoveries and 24 new deaths in the past 24 hours. In the same time, there were 9,857 tests administered nationwide, a welcome increase, though still far short of the government’s claims that it has a capacity to conduct 25,000 tests/day.

The largest number of tests was administered by Punjab province, which is now also conducting tests of Pakistanis returning from abroad via special flights to airports at Rawalpindi, Lahore and Multan. On Tuesday, the province reported it had administered 5,043 tests; Sindh 2,571; Khyber-Pakhtunkhwa 783; Islamabad 993; Gilgit-Baltistan 142; Pakistan-administered Kashmir 54; and Balochistan 271.

Prime Minister Imran Khan on Monday formally operationalized the Corona Relief Tiger Force, with Adviser on Youth Affairs Usman Dar telling media it would be supervised by Khan, while being under the direct authority of the district administration. The volunteer force has been tasked with raising awareness about the novel coronavirus, distributing rations, and ensuring social distancing guidelines are followed at Utility Stores and wherever else the bureaucracy might deploy their services.

During a nationally televised briefing on the Corona Relief Tiger Force, the prime minister announced that the government would gradually be reopening shops and industries, claiming “the novel coronavirus is no longer a huge concern in Pakistan right now.” He also warned that if citizens did not follow preventative measures after industries were reopened, the country could spiral into a healthcare disaster.

The country’s most populous province recorded 579 new infections in the past 24 hours, the highest single-day jump in over a month, raising its total confirmed COVID-19 cases to 8,103. Punjab also reported 12 new deaths, bringing its casualty count to 136.

Overall, the province has reported 2,716 recoveries, leaving 5,251 active cases, 518 more than a day earlier. The majority of the cases continue to be reported from Lahore, according to the Punjab Disaster Management Authority, which has said 2,858 infections and 64 fatalities have thus far occurred in the provincial capital.

The total number of confirmed COVID-19 cases in Sindh province rose to 7,882 on Tuesday, with 417 new infections recorded—the majority, 371, in provincial capital Karachi. Additionally, the province recorded 7 new deaths, raising its casualties to 137, while its recoveries rose by 74 to 1,629.

Overall, the province currently has 6,116 active cases right now, 336 more than a day ago. 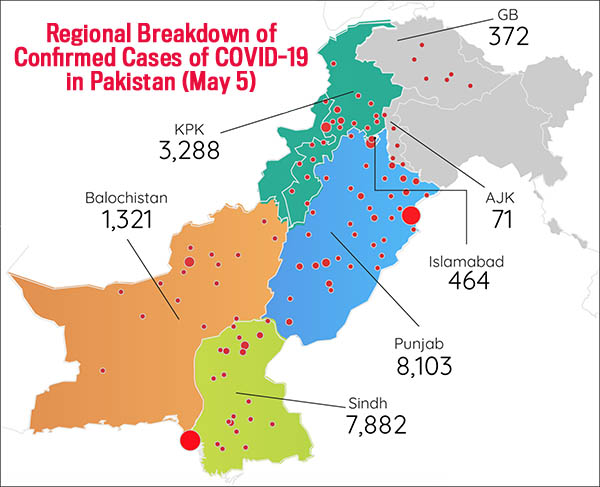 The province’s fatality rate due to COVID-19 climbed to 185 on Tuesday, 5 more than a day earlier. This remains the highest COVID-19-related fatality rate in the country, exceeding by nearly 50 the deaths thus far reported in Sindh and Punjab provinces.

Overall, the province has now recorded 3,288 confirmed cases of the novel coronavirus, with 856 recoveries, 45 more than 24 hours ago. It currently has 2,247 active cases, 109 more than a day earlier.

The province has thus far reported 1,321 confirmed cases of the novel coronavirus, with 21 deaths and 197 recoveries. It currently has 1,103 active cases. The province has not reported any new deaths or recoveries in the past 24 hours.

Provincial government spokesman Liaquat Shahwani on Monday announced that authorities had decided to extend movement restrictions due to the rapid spread of the virus. “COVID-19 is rapidly spreading in Balochistan. The only medicine and solution so far has proven to be isolation, social distancing, and lockdown,” he posted on Twitter. “Hence Balochistan government has decided to extend lockdown for further 15 days till May 19.”

Islamabad on Tuesday raised its confirmed COVID-19 infections to 464, with no new deaths or recoveries. Thus far, the Islamabad Capital Territory has reported 4 deaths and 56 recoveries, leaving 404 active cases, 49 more than a day earlier.

In Gilgit-Baltistan, cases of the novel coronavirus rose to 372, with no new deaths and 19 new recoveries. Overall, 3 deaths due to COVID-19 have been reported from the region, and 279 recoveries, leaving 90 active cases, 11 less than a day earlier.

In Pakistan-administered Kashmir, the total number of confirmed cases remains unchanged from a day ago at 71, nor have any new deaths been reported. However, 5 new recoveries were recorded, raising its recovered tally to 49. Overall, it has 22 active cases of the virus, 5 less than a day earlier.

Globally, the virus has now infected more than 3,646,200 people, with over 252,400 reported deaths. Governments across the world have halted flights, locked down towns and cities and urged people to stay at home, but there are signs of easements to help shuttered economies recover. Overall, around 1,200,190 patients of the 3.6 million+ infected have recovered thus far.