As government announces easing of lockdown, infections climb to 25,837, with 594 deaths and 7,530 recoveries

The past 24 hours also witnessed 30 new deaths due to the outbreak, against 1,066 recoveries, raising the death toll and overall recoveries to 594 and 7,530, respectively.

According to the National Command and Operation Center, Pakistan has administered 11,993 tests in the past 24 hours, bringing to 257,247 the total tests conducted since the virus first emerged in Pakistan at the end of February. This number does not, however, mean that more than 250,000 Pakistanis have been tested for COVID-19, as multiple tests are required for every patient before they are allowed to leave quarantine.

Overall, Pakistan currently has 17,713 active cases of the novel coronavirus, 668 more than a day earlier.

Prime Minister Imran Khan on Thursday announced that Pakistan would start to “gradually” ease lockdowns from Saturday (tomorrow), as “our people are suffering.” Claiming that the spread of the novel coronavirus was still under control, he warned that if citizens did now follow social distancing guidelines and the disease started to spread even faster, the government would be forced to enforce a lockdown once again.

Under the eased lockdowns, markets—small retailers, sectors related to construction, neighborhood shops—would be allowed to open for five days a week. They would also be allowed to open after sehri during Ramzan, and would be required to close by iftar. All industries allied with the construction sector have been allowed to resume operations, though public transport remains suspended, despite reservations by the prime minister, as provincial authorities said it would lead to rapid spread of the virus.

The government has also decided to open select out-patient departments in various hospitals to allow for continued treatment of diseases and ailments other than COVID-19. Schools, universities and other educational institutions, meanwhile, would remain shut until at least July 15.

The country’s most populous province on Friday also became the first to cross 10,000 confirmed cases of the novel coronavirus. A significant portion of these are returning pilgrims from Iran—most of whom have now tested negative for COVID-19—and members of the Tablighi Jamaat, who have also completed their quarantine period.

Meanwhile, its death toll climbed to 183, as it recorded 8 new deaths.

Thus far, the province has reported 10,033 confirmed cases of the novel coronavirus, against 4,062 recoveries, leaving 5,788 active cases, 70 more than a day earlier. The majority of the cases continue to be reported from provincial capital Lahore, according to the Punjab Disaster Management Authority.

“The Sindh government maintains its view that we have to fight coronavirus, not the federal government,” Advise to Sindh C.M. Senator Murtaza Wahab told media on Thursday, noting that lockdown relaxations from Saturday would not apply to shopping malls, plazas or cinemas. Nor would it apply on offices that were already shut, he added.

Meanwhile, Sindh Governor Imran Ismail confirmed that he had been retested for COVID-19 and come back positive once more, extending his time in quarantine.

On Friday morning, the total number of confirmed COVID-19 cases in Sindh rose to 9,093, with 453 new infections recorded. Additionally, the province recorded 14 new deaths, raising its casualties to 171, while its recoveries rose by 122 to 1,853.

Overall, the province currently has 7,069 active cases right now, 317 more than a day ago. 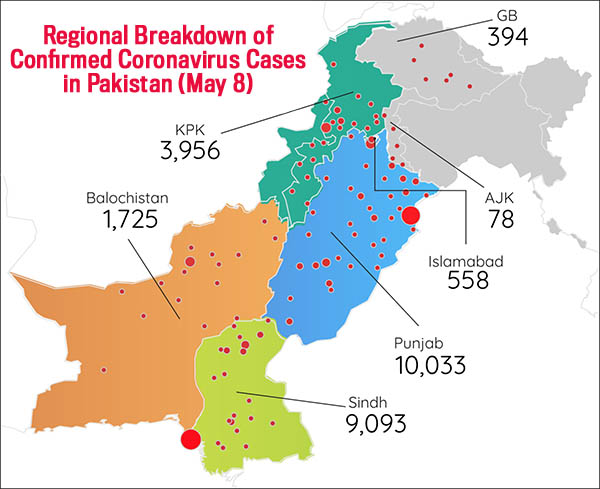 The province’s fatalities due to COVID-19 hit 209 on Thursday morning, 6 more than a day earlier. This remains the highest COVID-19-related fatality rate in the country, exceeding by nearly 30 the deaths thus far reported in Punjab, which has the second highest death toll.

Overall, the province has now recorded 3,956 confirmed cases of the novel coronavirus, with 984 recoveries. It currently has 2,763 active cases, 193 more than a day earlier.

The sole province to extend its movement restrictions—till May 19—over the rapid spread of the disease, has thus far reported 1,725 confirmed cases of the novel coronavirus, with 24 deaths and 209 recoveries. It currently has 1,492 active cases, 64 more than a day earlier. The province has reported 2 new deaths in the past 24 hours, and 0 new recoveries.

Provincial spokesman Liaquat Shahwani on Thursday said the province would monitor traders and citizens for the next few days and if cases did not spiral out of control, it would consider easing lockdowns to boost the economy.

Islamabad on Friday raised its confirmed COVID-19 infections to 558, with no new deaths and 16 recoveries. Thus far, the Islamabad Capital Territory has reported 4 deaths and 56 recoveries, leaving 482 active cases, 21 more than a day earlier.

In Gilgit-Baltistan, cases of the novel coronavirus rose to 394, with no new deaths and 6 new recoveries. Overall, 3 deaths due to COVID-19 have been reported from the region, and 292 recoveries, leaving 99 active cases, 2 more than a day earlier.

In Pakistan-administered Kashmir, the total number of confirmed cases climbed by 2 to 78, with no new deaths and 1 new recovery. Overall, it has 20 active cases of the virus, 1 more than a day earlier.

Globally, the virus has now infected more than 3,917,500 people, with over 270,700 reported deaths. Governments across the world have halted flights, locked down towns and cities and urged people to stay at home, but there are signs of easements to help shuttered economies recover. Overall, around 1,344,120 patients of the 3.9 million+ infected have recovered thus far.