Pakistan on Thursday continued its streak of recording more than 100 deaths/day due to COVID-19, as Prime Minister Imran Khan a day earlier reiterated his claims that the country had to “learn to live with the virus.”

Addressing a press conference in Karachi, Khan repeated his well-worn statements about Pakistan’s stuttering economy and the challenge between lives and livelihoods. But as deaths and infections continue to climb, criticism of the government’s policies is mounting both at home and abroad.

In the 24 hours preceding 8:00 a.m., Thursday, Pakistan’s death toll climbed by 118 to 3,093. Meanwhile, the country also recorded 5,358 new infections after conducting 31,500 tests—the highest number of tests conducted in a single day thus far. Confirmed cases of the coronavirus have now risen to 160,118.

In the same period, 778 patients were declared COVID-free, raising recoveries to 59,215. There are currently 97,810 active cases of COVID-19 in the country, with the National Command and Operation Center reporting 3,159 of them are in critical condition.

Dr. Attaur Rahman, chairman of the prime minister’s task force on science and technology, has told ThePrint that the “actual numbers [of coronavirus cases] will be two to three times more than what the government is reporting.” He said Pakistan was still testing far too little with respect to its overall population, and slammed the lack of random testing to identify viral hotspots.

The provincial government on Wednesday implemented its ‘selective’ lockdown policy in various cities, with areas that have reported a large number of coronavirus infections being sealed for two weeks. There has been cautious optimism about this approach from the public, but some experts have claimed the spread is now too widespread to be contained by isolated interventions.

On Thursday, authorities reported 53 new deaths due to COVID-19, raising total fatalities to 1,202. The province also reported 1,899 new infections, raising confirmed cases to 60,138, against 17,825 recoveries. There are now 41,111 active cases of the virus in Punjab province.

Coronavirus hotspots in provincial capital Karachi are set to be locked down from 7 p.m. today (Thursday). Karachi Commissioner Iftikhar Ali Shallwani said late on Wednesday night that “sensitive areas” would be sealed to curb the spread of COVID-19.

The province reported 23 new deaths on Thursday morning, raising its death toll to 755. In the past 24 hours, its recoveries rose by 215 to 5,137, while its confirmed cases have increased by 506 to 19,613. There are currently 13,721 active cases of coronavirus in the province. 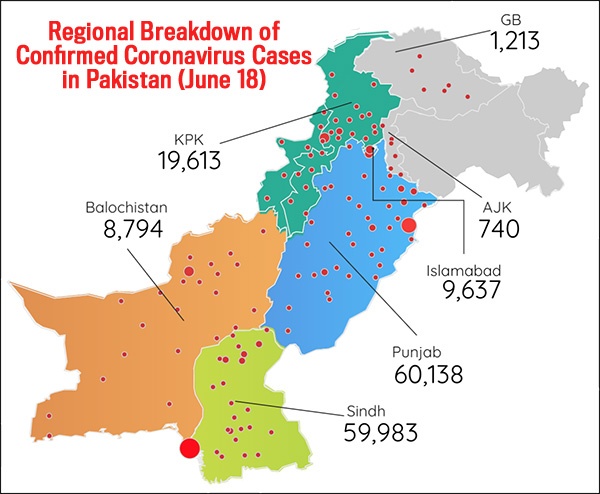 Confirmed cases of the novel coronavirus in the province on Thursday rose by 357 to 8,794, with 4 new fatalities raising the total death toll to 93. Overall, 3,051 patients have recovered from the virus, leaving 5,650 active cases of COVID-19.

District health officials on Wednesday said around 30 percent of the confirmed cases reported in the federal capital had recovered thus far. The city on Thursday raised its confirmed coronavirus cases to 9,637, with 93 fatalities. Overall there have been 2,439 recoveries, leaving 7,104 active cases of COVID-19.

Confirmed cases of the novel coronavirus in Gilgit-Baltistan have risen to 1,213. Overall, the region has thus far reported 18 deaths and 768 recoveries, leaving 427 active cases.

In Pakistan-administered Kashmir, confirmed cases increased to 740. In the past 24 hours, there have been 2 new deaths and 12 recoveries, increasing death toll to 15, and recoveries to 302. There are now 423 active cases of the coronavirus in the region.

Globally, the virus has now infected more than 8,406,060 people, with over 451,385 reported deaths. Governments across the world have halted flights, locked down towns and cities and urged people to stay at home, but there are signs of easements in nations that have reined in the virus’ spread to help shuttered economies recover. Overall, around 4,415,830 patients of the 8.4 million+ infected have recovered thus far.