Death toll from deadly disease rises to 124, with 1,645 recoveries

The number of confirmed coronavirus cases in Pakistan on Thursday was recorded at 6,520, with 1,645 recoveries and 124 deaths, leaving 4,751 active cases in the country. Nationwide, 5,540 tests for COVID-19 were administered in the past 24 hours.

Despite the federal government’s claims that the virus is not spreading as fast as they had predicted—or caused as many casualties—the deaths caused by it continue to rise daily. A day earlier, the country had reported 107 deaths, meaning there were 17 reported deaths in a single day.

Similarly, while 199 people have recovered in the past 24 hours, 517 new cases were reported; if this pace continues, it threatens to overwhelm the country’s medical facilities.

According to the government’s official dashboard monitoring the spread of coronavirus, Punjab has now reached 3,232 confirmed cases, with 34 deaths and 550 recoveries. While the province is thus far reporting the highest number of cases in the country, the numbers are slightly skewed because of the high percentage of cases being found in returning pilgrims from Iran and from members of the Tablighi Jamaat.

According to the Punjab Health Department, 1,236 of the cases are from Raiwind (Tablighi Jamaat), 91 are prisoners, and 1,204 are common citizens. The remaining 701 are from among pilgrims.

The total deaths reported by the province increased by 6 to 34. Overall, the province has administered 46,561 tests for the coronavirus, a jump of nearly 3,000 from the previous day, still short of the provincial health department’s claims that it can test over 3,500 people per day.

The Sindh Health Department has confirmed that the province has recorded 1,668 patients with COVID-19, including 41 deaths and 560 recoveries. This leaves 1,067 active cases in the province, 11 more than were reported a day earlier. The greatest number of cases has been reported from provincial capital Karachi, 1,097, of whom 879 are still active.

Chief Minister Murad Ali Shah on Wednesday appealed to the people to exercise caution, warning that this disease is far deadlier than people believe. He also issued the standard operating procedures that the province is requiring of industries to allow them to resume operations in a bid to curb the spread of the virus. No other province—or the center—have issued these guidelines yet despite claiming no industry would reopen without first adopting them. 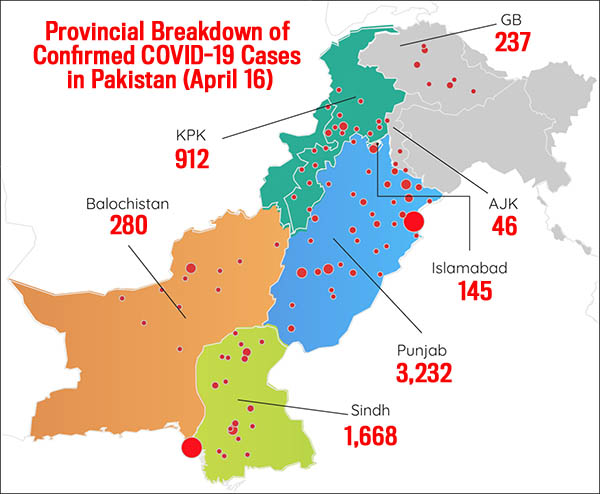 The province reported 50 new cases overnight and 4 new deaths, raising its confirmed COVID-19 cases to 912, with 41 deaths. The province has also reported 191 recoveries, meaning there are now 680 active cases in the province.

On Wednesday, the province had reported 649 active cases, once again suggesting that the rate at which patients are being infected exceeds their rate of recovery. According to healthcare professionals, if the infections continue to outpace recoveries, there is great risk of Pakistan’s healthcare facilities being overwhelmed by the influx of infections.

“Our biggest worry and challenge is [provincial capital] Peshawar, where numerous cases are emerging every day. 235 positive cases in all, and 38 new ones yesterday,” Khyber-Pakhtunkhwa Health and Finance Minister Taimur Jhagra said on Twitter in a series of posts. “With a district population of 4.5 million, Peshawar now has the third highest number of discovered cases in the country, after Karachi and Lahore. We can only contain the disease well in Peshawar with the help and support of the media and the people here,” he added.

“This serves to show that while the national lockdown has given us some time and has prevented faster infection rates, we need to be prepared to live with corona until a vaccine is found. This will require a partnership between government and society like never before,” he said.

Provincial authorities have reported 40 new cases—31 of them from Quetta—alongside 140 overall recoveries and 2 deaths, bringing its current active cases to 138, a jump of 37 from the previous day.

The Balochistan government has come out in favor of lockdowns but has noted that phased easements should be implemented to ensure laborers are not left without any resources. Spokesperson Liaquat Shahwani told a private broadcaster on Wednesday that movement restrictions had proven to restrict the spread of the disease, adding the next step was to ramp up testing to identify hotspots of the virus.

The Islamabad Capital Territory on Thursday reported five new cases, raising the confirmed COVID-19 cases there to 145. Of these, 17 have fully recovered, while there has been one death reported. The federal capital currently has 127 active cases, a spike of 5 from a day earlier. Meanwhile, in Gilgit-Baltistan, the infections rose to 237, with 3 deaths and 178 recoveries. The region has sustained its 59 active cases, as 3 new cases were reported while 3 others recovered. In Pakistan-administered Kashmir, which has thus far reported no deaths from COVID-19, the total number of confirmed coronavirus cases stayed consistent at 46, with 5 new recoveries, leaving 37 active cases.

The Government of Pakistan on Tuesday announced that it was easing the ongoing movement restrictions and opening up several industries, but would maintain bans on large public gatherings, schools, shopping centers, and public transport. Announcing the measures, Prime Minister Imran Khan claimed the country was stuck between “hunger on one side, and corona on the other,” and had opted to resume economic activity to aid daily wagers and laborers. He said individual provinces could opt for stricter measures if they felt it was necessary to curb spread of coronavirus.

Globally, the virus has now infected more than 2,084,000 people, with over 134,660 reported deaths. Governments across the world have halted flights, locked down towns and cities and urged people to stay at home. Overall, around 515,000 patients of the 2 million+ infected have recovered thus far.