The federal government on Tuesday announced an extension to the ongoing lockdown by two weeks, but introduced a series of exemptions for so-called low risk industries to resume operations.

The easing has resulted in several traders flouting government orders, and mosques announcing that will continue congregational prayers, including on Friday and during Ramzan. Observers have warned that this risks spreading the virus like wildfire, especially following the massive jump in cases from members of the Tablighi Jamaat and returning pilgrims from Iran.

Overall, only 120 people have recovered in the past 24 hours, against 505 new infections. That leaves 385 additional cases, a ratio that if it persists in the coming days could very quickly overwhelm the country’s healthcare infrastructure.

In a daily update on his Twitter page, Chief Minister Usman Buzdar confirmed that of the 3,276 positive cases in the province, 1,227 were from among the general population; 1,257 from members of Tablighi Jamaat; 701 in pilgrims returning from Iran; and 91 prisoners. The province, on Thursday night, had 17 patients in critical condition. The provincial death toll has reached 36, according to the National Institute of Health.

The Sindh Health Department has confirmed 2,008 confirmed COVID-19 cases, including 45 deaths and 576 recoveries. This leaves 1,387 active cases in the province, a jump of over 300 from a day earlier. The greatest number of cases has been reported from provincial capital Karachi, 1,167, of whom 931 are still active.

According to Adviser to Sindh C.M. Murtaza Wahab, the province has conducted 2,874 tests in the past 24 hours, with 340 of them testing positive for the novel coronavirus. “It is unfortunate that there is a perception among the people that the lockdown has been cleared due to easing of restrictions on some sectors,” he said, adding in the next 2-3 days stricter enforcement would be implemented.

Chief Minister Murad Ali Shah has maintained that the province will strengthen its lockdown to curb the spread of the coronavirus, but ground realities have suggested this might not be true. Traffic on the roads has increased, while exemptions announced for ‘low risk’ industries have resulted in several industries and their related supply chains resuming operations.

The province reported 58 new cases overnight and 3 new deaths, raising its confirmed COVID-19 cases to 993, with 45 deaths. The province has also reported 205 recoveries, meaning there are now 743 active cases in the province.

Admitting that the province has been lacking in testing capacity, Health and Finance Minister Taimur Jhagra on Thursday said that Khyber-Pakhuntkhwa intended to raise its testing to more than 1,000 tests per day in the coming week, with a desire to double that within two weeks. “In addition to our flagship lab at KMU, which will soon start operating 24/7, secondary labs at HMC, Swat, DI Khan are ramping up operations; followed by Mardan, Swabi, Bannu, Abbottabad and Kohat, as well as at LRH and KTH in Peshawar,” he added. 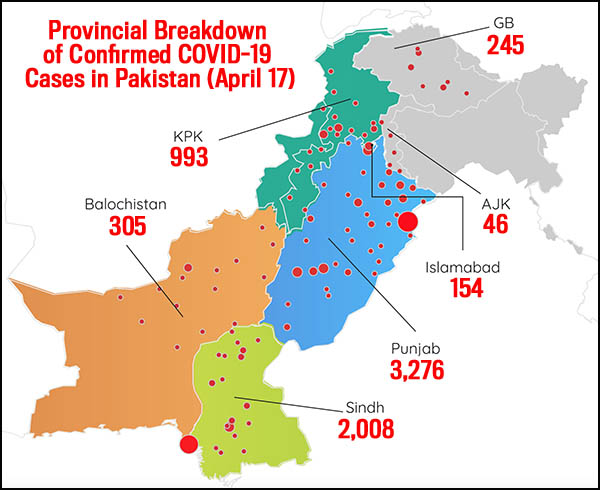 Provincial authorities have reported 3 new deaths, raising the provincial total to 5, alongside 142 recoveries. Overall, the confirmed number of COVID-19 cases in the province has reached 305, out of which 158 are still active.

The Balochistan government has announced that it is meeting with local traders to formulate and establish a reasonable way forward for ending the ongoing lockdowns in the region. Spokesman Liaquat Shahwani has warned that the province’s healthcare infrastructure is lagging and authorities do not want to risk a large surge in infections.

The Islamabad Capital Territory on Thursday reported 9 new cases, raising the confirmed COVID-19 cases there to 154. Of these, 20 have fully recovered, while there has been one death reported. The federal capital currently has 133 active cases, a spike of 6 from a day earlier. Meanwhile, in Gilgit-Baltistan, the infections rose to 245, with 3 deaths and 183 recoveries. The region’s active cases have risen to 59. In Pakistan-administered Kashmir, which has thus far reported no deaths from COVID-19, the total number of confirmed coronavirus cases stayed consistent at 46, with 9 recoveries, leaving 37 active cases.

Globally, the virus has now infected more than 2,183,000 people, with over 146,850 reported deaths. Governments across the world have halted flights, locked down towns and cities and urged people to stay at home. Overall, around 552,700 patients of the 2.1 million+ infected have recovered thus far.