Pakistan on Wednesday morning broke its own record for highest number of coronavirus infections in a single 24-hour period, with 4,131 new infections reported, raising confirmed cases nationwide to 80,463.

In the same 24-hour period, 67 deaths were recorded, bringing to 1,688 the fatalities caused by the virus. Nationwide, 17,370 tests were administered—a new peak that is inching closer to the 30,000/day Planning Minister Asad Umar has claimed the government has the capacity for—while 28,923 people have now made full recoveries.

There are currently 49,852 active cases of the coronavirus in the country.

Provincial health minister Dr. Yasmin Rashid, in a press briefing on Tuesday, sought to quell concerns that the government had purposely acted against the recommendations of her own department to enforce a “strict” lockdown in Lahore to curb the spread of the virus. “Our economy just couldn’t support it,” she said, ignoring that her expertise is the health sector, not finance.

The province has also been pushing for tourist hotspots and restaurants to open—proposals that the remaining provinces have repeatedly rejected as too risky in light of spiking cases of COVID-19.

On Wednesday, the provincial death toll due to COVID-19 increased by 30 to 570, exceeding all other provinces and federally administered areas. The province also reported 1,639 new infections, raising confirmed cases to 29,489, against 7,469 recoveries. There are now 21,450 active cases of the virus in Punjab province.

Sindh lawmaker Haji Ghulam Murtaza Baloch died due to COVID-19 on Tuesday, the latest parliamentarian to succumb to the disease. In a press conference, Information Minister Nasir Hussain Shah said that 25 percent of coronavirus tests being tested in the province were coming back positive, which was “extremely alarming.”

Hitting out at the federal government’s dithering on lockdowns, he said: “If a complete lockdown had been imposed in the beginning, the coronavirus would not have spread so much today, but now we have to live with it for a long time.”

The total number of confirmed COVID-19 cases in the province on Wednesday morning rose by 1,439 to 31,086. Additionally, the province raised its casualties by 23 to 526, while its recoveries rose to 15,538. Overall, the province now has 15,022 active cases of the novel coronavirus. 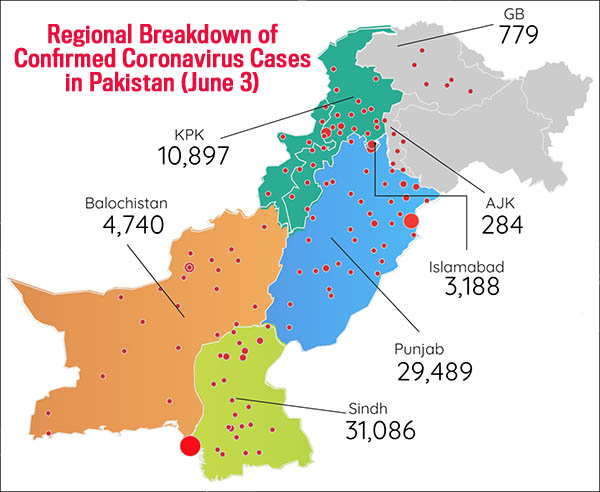 Provincial Health and Finance Minister Taimur Jhagra on Tuesday posted on Twitter that authorities had apprehended the people who had attacked a doctor at the Hayatabad Medical Complex taking swabs of suspected COVID-19 patients. “The hysteria around coronavirus brings out the worst in some of us,” he said. “The health system is under stress, but it is coping and doing a commendable job in difficult circumstances. If required, we will rapidly bring in legislation to protect against such vandalism.”

The province reported 8 new deaths on Wednesday, raising its death toll to 490. In the same time period, its recoveries rose to 3,085, while its confirmed cases have increased by 412 to 10,897.

There are currently 7,469 active cases of coronavirus in the province.

The province is the only one that has opted to implement a single-day “lockdown” every Friday, while keeping a majority of sectors functional the remaining six days from 9 a.m. to 7 p.m. In a press conference, spokesman Liaquat Shahwani announced the government was pursuing a Rs. 13.3 billion project to help establish institutes of pulmonology and vaccine development, including revamping existing hospitals and ICU and ventilators facilities to cope with challenges posed by current and future pandemics.

Islamabad on Tuesday raised its confirmed COVID-19 infections to 3,188, with 34 deaths and 399 recoveries. Presently, the Islamabad Capital Territory has 2,755 active cases of the novel coronavirus.

The Gilgit-Baltistan administration has urged the federal government against restoring tourism in the region, warning that it could result in a massive spike in cases that healthcare infrastructure would not be able to cope with. Confirmed cases of the novel coronavirus there have now risen to 779. Overall, it has thus far reported 12 deaths and 529 recoveries, leaving 238 active cases.

In Pakistan-administered Kashmir, confirmed cases have increased to 284. It has also reported 7 deaths and 170 recoveries, leaving 107 active cases of the virus.

Globally, the virus has now infected more than 6,452,390 people, with over 382,475 reported deaths. Governments across the world have halted flights, locked down towns and cities and urged people to stay at home, but there are signs of easements to help shuttered economies recover. Overall, around 3,066,690 patients of the 6.4 million+ infected have recovered thus far.