Nationwide, there have been 192 deaths reported and 2,066 recoveries, leaving 6,961 active cases

Pakistan recorded its largest single-day rise in confirmed coronavirus cases on Tuesday morning, as the total number of infections rose by 697 to hit 9,219. The sharp jump was accompanied by 16 new deaths and 96 new recoveries, leaving 6,961 active cases across the country.

Special Assistant to the P.M. on Health Dr. Zafar Mirza, in his daily media briefing on Monday night, appeared to attribute some of the spikes witnessed in the past few days on increased testing. “We hope to further expand our capacity to 20,000 tests/day by the end of this month,” he said, a far sight above the current maximum of approximately 6,000.

According to Mirza, more than 64 percent of the cases being recorded in Pakistan are due to local transmission, up from around 50 percent last week, suggesting that the virus is spreading through the population despite the government’s “smart lockdown” measures to curb its spread. Experts have repeatedly warned that easing movement restrictions without first identifying and isolating clusters of the virus risks boosting its spread.

The country’s most populous province reported the highest number of new cases in the past 24 hours, raising its tally from 3,721 to 4,195. Of these, 1,857 have been found in participants of the Tablighi Jamaat; 743 among pilgrims returning from Iran; 97 among prisoners; and 1,498 among the general population.

Provincial capital Lahore is emerging as the regional epicenter of the disease, as even ignoring the large numbers being reported from Raiwind, it’s tally currently stands at 629, against the runner-up Rawalpindi’s 175.

Overall, the province has recorded 45 deaths and 724 recoveries, leaving 3,426 active cases. It currently has 14 patients in critical condition, according to Punjab Chief Minister Usman Buzdar.

Similar to Punjab, provincial capital Karachi has recorded the highest number of confirmed cases of the coronavirus in Sindh. According to the provincial Health Department, of the 2,767 cases in the province, 1,690 have been recorded in Karachi, of which 240 have recovered and 57 died. The metropolis has 1,396 active cases of the virus.

Overall, Sindh has recorded 61 deaths, the second highest provincial death toll due to COVID-19 in the country. It also has 635 recoveries, leaving 2,071 active cases of the novel coronavirus.

Provincial authorities have been steadfastly backing extended lockdowns with phased re-openings, arguing that Pakistan has yet to hit its peak and if the virus continues to spread, especially within heavily populated slum areas, it could yield a massive death toll that would be difficult to manage for a country with Pakistan’s healthcare infrastructure.

Thus far the worst-hit in terms of fatalities, Khyber-Pakhtunkhwa on Monday night reported that it had recorded 39 new confirmed cases of COVID-19, with 7 new deaths and 35 new recoveries. Overall, the province has reported 1,276 cases of the coronavirus, 74 deaths, and 302 recoveries. It currently has 900 active cases.

The most affected districts are provincial capital Peshawar and Mardan, which Health and Finance Minister Taimur Jhagra has attributed to migration patterns in those cities, where a lot of laborers travel outside the province or country for work before returning to their homes. 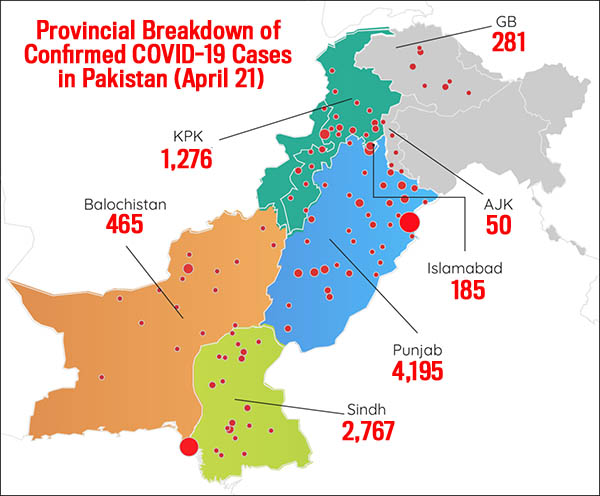 On Monday night, provincial spokesman Liaquat Shahwani told private broadcasters that the provincial government had decided to proceed to random testing to overcome its lack of testing capability. He said that the government wanted to conduct 50,000 tests on an urgent basis, but due to a shortage of kits and related paraphernalia, it would now randomly test in suspected districts in a bid to identify the regions most at risk.

Overall, the province has reported 465 confirmed cases of COVID-19, with 6 deaths and 161 recoveries. It currently has 298 active cases. Provincial capital Quetta, according to the National Institute of Health, accounts for 2.89 percent of the total cases in Pakistan.

The Islamabad Capital Territory on Tuesday reported that the confirmed number of COVID-19 cases had increased to 185, with 3 deaths and 20 recoveries. The federal capital currently has 162 active cases, four more than 24 hours ago.

In Pakistan-administered Kashmir, which has thus far reported no deaths from COVID-19, the total number of confirmed coronavirus cases rose by 1 to 50, with 16 recoveries, leaving 34 active cases, five fewer than it had reported a day earlier.

Globally, the virus has now infected more than 2,482,150 people, with over 170,470 reported deaths. Governments across the world have halted flights, locked down towns and cities and urged people to stay at home. Overall, around 652,170 patients of the 2.4 million+ infected have recovered thus far.