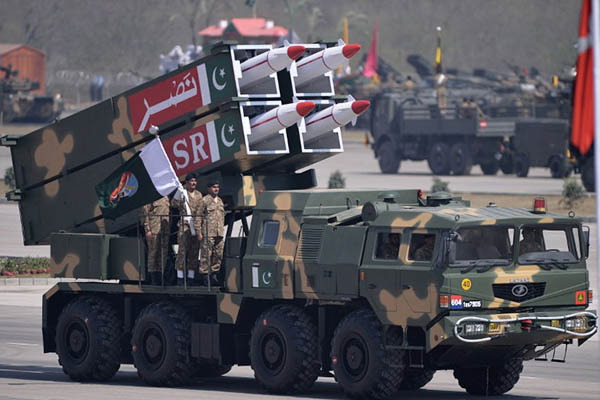 Pakistan held its first republic day parade in seven years on Monday, aimed at informing the nation that the armed forces have gained an upper hand in the fight against terrorism.

The annual Pakistan Day parade was last held in 2008 before authorities abandoned it because of fears it could be targeted as Taliban militants increased their attacks on the military. It marks the signing of the Pakistan Resolution on March 23, 1940, in which the All India Muslim League decided to seek a separate Muslim state.

The joint military parade was presided over by Prime Minister Nawaz Sharif, President Mamnoon Hussain, and Army chief Gen. Raheel Sharif, took place at the Shakar Parian parade grounds in the federal capital. Personnel from all three military cadres, including their chiefs, were in attendance. The parade was televised live and was attended by hundreds of men, woman and children waving miniature flags in celebration.

“I am really proud to be here. Such programs inspire the youth,” said Darpan Kumar, a 16-year-old who was attending the event. “The government should organize similar events more often to remind the youth of the rich history of the country.” He said the sophisticated weaponry on display was a great morale booster, and showed Pakistan’s enemies its armed forces were very capable.

Addressing the nation, President Hussain paid rich tribute to the martyred of the Army Public School, massacred in a Taliban attack on Dec. 16, 2014. He also reiterated the government’s resolve to have friendly ties with neighboring India, and resolve the issue of Jammu and Kashmir as per the wishes of the Kashmiri people.

Both modern and more traditional elements of Pakistan’s military arsenal were on display, from nuclear-capable missiles and the new homemade, armed Burraq drone to a camel-mounted musical band. There were fly-pasts by the Air Force, including some dizzying aerobatic displays by JF-17 Thunder fighters, which are locally produced in cooperation with close ally China.

Nuclear-capable Nasr and Shaheen missiles, which have a range of up to 1,500 kilometers, and Babur cruise missiles, were also paraded.

“For years my parents would tell us about the March 23 parade, but we had no idea of its impact until today,” said Muhammad Shafay Waqas, an 8th grade student. “I am enjoying everything in the parade, especially the drone aircraft,” he added.

Fiza Ali, producer of Namaloom Afrad, said: “The government should organize such events every year to promote Patriotism. The war on terror can only be resolved by promoting events related to patriotism and nationalism.”

The government had suspended cell phone services in parts of Islamabad and Rawalpindi from 6:00 a.m. to 2:00 p.m. as a precaution against terror threats. Security forces were also deployed at all exit and entry points to the capital.