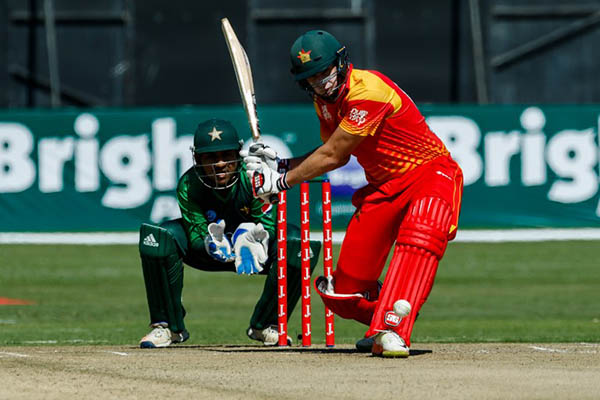 Pakistan cruised to a 74-run win on Sunday over their hosts in the opening match of the Zimbabwe Twenty20 Tri-Series.

A career best 61 from opening batsman Fakhar Zaman, and a late flurry of boundaries from Asif Ali and veteran batsman Shoaib Malik set up Pakistan’s imposing 182 for 4. In reply, Zimbabwe mustered just 108 all out, with the wickets shared around Pakistan’s bowling attack. Mohammad Nawaz, Usman Khan, Mohammad Hafeez and Hasan Ali picked up two apiece.

“We decided that whether we batted or bowled first didn’t really matter,” said left-arm spinner Nawaz. “But with the start Fakhar Zaman gave us, and with Asif Ali and Shoaib Malik finishing it off, we felt we had enough runs.”

Zaman’s efforts were vital to Pakistan’s total. He kept Pakistan steady through the first half of their innings while Zimbabwe, having opted to bowl first, chipped away at the other end with regular strikes.

With Mohammad Hafeez, Hussain Talat, and captain Sarfraz Ahmed all falling cheaply, Pakistan were helped by Zaman’s fluent scoring at the other end, and he brought up his second T20 international half century from 33 deliveries with a flick through square leg in the 13th over.

Zaman appeared settled at the crease, but two overs later he missed a heave at Chisoro and had his leg stump pegged back. By then, however, Pakistan were 121 for 4, and with just over five overs still to be bowled had set a considerable platform.

Ali and Malik combined to plunder 61 from the last five, including five sixes, as Zimbabwe’s bowlers struggled to contain them. The hosts were further hampered by the loss of senior seamer Kyle Jarvis, who injured his right hand attempting to take a catch in the 13th over, and immediately left the field with a suspected dislocation and fracture to his right thumb.

Zimbabwe’s response with the bat never got going.

Opening the bowling, Nawaz removed Chamu Chibhabha with his sixth delivery. He conceded just three runs in his opening spell, and Zimbabwe were immediately behind the asking rate. “For the last couple of seasons I’ve been opening the bowling in T20 cricket,” explained Nawaz. “I was varying the pace and getting a little help from the track. The slower deliveries were turning a bit, though with the new ball there wasn’t that much.”

Opener Solomon Mire fired in fits and starts to record a 29-ball 27, while Tarisai Musakanda cracked a busy 43 in his debut Twenty20 International innings. But there was little support from the rest of the top order, with Elton Chigumbura the only other batsman to reach double figures.

The Zimbabwean tail collapsed completely, the last four wickets falling for the addition of just six runs, with Hafeez taking 2 for 3 in his first over in international cricket since his bowling action was cleared as legal last month.

Pakistan will face Australia in Monday’s match, and Nawaz suggested there was no need to tinker with their gameplan. “We’ll go in with the same mindset tomorrow and play our best cricket,” he said. “We’ll keep the same strategy we had today, and probably the same gameplan too.”